An IED blast, which took place between Jamborkheda and Lendhari, was targeted on a police vehicle. 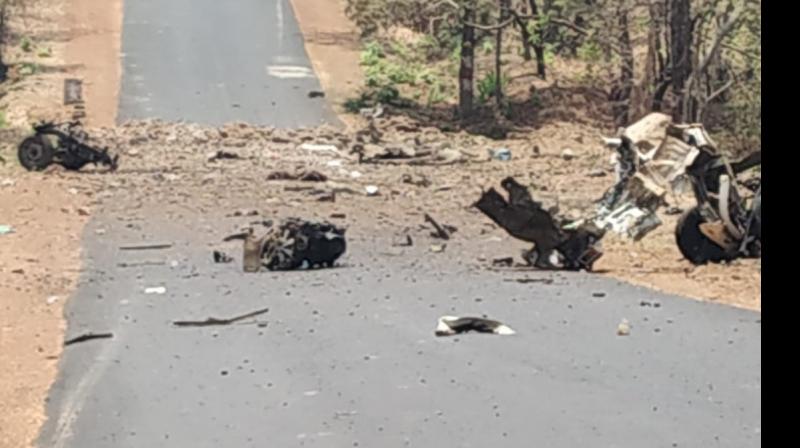 Gadchiroli: Fifteen security personnel and a civilian driver have lost their lives in an improvised explosive device (IED) blast carried out by naxals in Kurkheda tehsil of Gadchiroli district in Maharashtra on Wednesday.

The vehicle which was targeted was carrying the security personnel from the Kurkheda QRT and the blast took place near Lendhari nallah between Jamborkheda and Lendhari, according to police.

The attack comes hours after naxals set ablaze about 30 machines and vehicles at a road construction site in Kurkheda of Gadchiroli district. The QRT was travelling to inspect the torched vehicles but was ambushed on its way.

Police teams rushed to the spot to help in evacuation work.

Subodh Jaiswal, Maharashtra's Director General of Police said, "We are prepared to give a befitting reply to this attack (Gadchiroli Naxal attack). Operations are going on in the area to ensure that no further casualties take place."

"It would not be right to term this as an intelligence failure. It is a dastardly attack, we will try our best that such incidents are not repeated. Our people are present at the spot," added Jaiswal.

Maharashtra governor has cancelled the reception to be held at Raj Bhavan on the occasion of Maharashtra Day.

The attack comes a year after around 40 naxals were killed in a police encounter near Kasnasur village at the Maharashtra Chattisgarh border in Gadchiroli district.

On April 11, an encounter broke out between CRPF personnel and Naxals in the Naxal affected district of Gadchiroli.

In January this year, Naxals set ablaze vehicles in the villages of Kurkheda, Korchi and Potegaon.