The sea conditions are very likely to be rough to very rough along and off Odisha Coast on May 2 and become high to phenomenal by May 4. 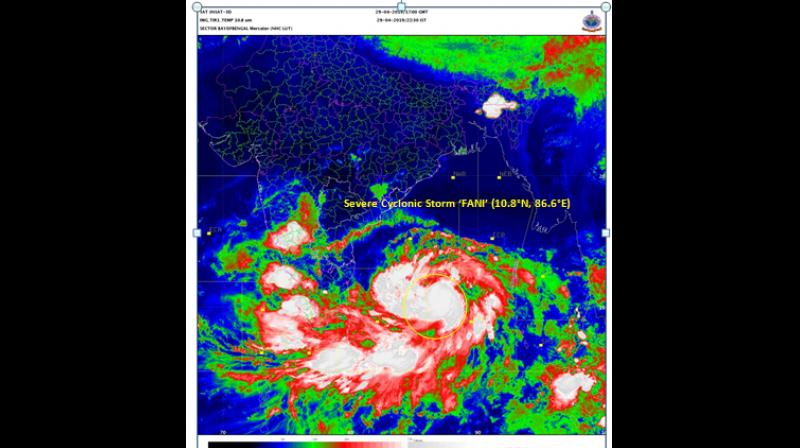 Bhubaneswar: Cyclone 'Fani' has intensified into an 'extremely severe cyclonic storm' and it will cross the Odisha coast between Gopalpur and Chandbali by Friday afternoon, the India Meteorological Department said Tuesday.

The IMD has issued a formal cyclone alert for Odisha, West Bengal and parts of Andhra Pradesh, and suggested evacuation of the costal areas.

The Cyclone Warning Division of the IMD said Cyclone 'Fani' (pronounced Foni) lays southwest and adjoining west-central and southeast Bay of Bengal about 760 km south-southwest of Puri (Odisha) and 560 km south-southeast of Visakhapatnam (Andhra Pradesh) and about 660 km north-northeast of Trincomalee (Sri Lanka).

"It has intensified into an extremely severe cyclonic storm," Additional Director General of the IMD Mritunjay Mohapatra told PTI.

The Election Commission lifted the model code of conduct from 11 districts in the path of the cyclone for speedy rescue, relief and rehabilitation activities. The poll body took the decision to lift the code in Puri, Jagatsinghpur, Kendrapara, Bhadrak, Balasore, Mayurbhanj, Gajapati, Ganjam, Khordha, Cuttack and Jajpur after chief minister Naveen Patnaik met the during the chief election commissioner on Tuesday.

'Fani' is very likely to move northwestwards till May 1 evening and thereafter recurve north-northeastwards and cross the Odisha coast between Gopalpur and Chandbali, to the south of Puri around May 3 afternoon with maximum sustained wind speed of 175-185 kilometres per hour gusting to 205 kmph, the IMD said.

In view of the severity of the situation, the Indian Navy has stationed two ships at Visakhapatnam and Chennai carrying expert divers and doctors, an official said. Aircraft of the Indian Navy are also in a state of readiness at two locations for emergency services. The Indian Air Force has also been alerted and their services will be utilised if necessary, Odisha Special Relief Commissioner (SRC) B P Sethi said, adding the state government has taken up the matter with the NDRF.

He said 20 units of the Odisha Disaster Rapid Action Force (ODRAF) and 335 units of fire services have also been kept in a state of preparedness. After a video conference with Union Cabinet Secretary P K Sinha, Odisha Chief Secretary A P Padhi told reporters that the primary task is to ensure proper evacuation of people from low-lying areas of the coastal districts, which will be launched on May 2.

All the 880 cyclone centres have been readied for the purpose. Boats have also been kept in a state of readiness, the SRC said. During the meeting, Padhi sought two helicopters be stationed in a state for emergency and additional NDRF personnel for rescue and relief operation.

The National Crisis Management Committee (NCMC), the country's top body to deal with emergency situations, met in Delhi Tuesday for a second time in as many days and reviewed the preparedness. The NDRF is deploying 41 teams in Andhra Pradesh (eight teams), Odisha (28) and West Bengal (five teams). In addition, the NDRF is keeping on standby 13 teams in West Bengal and 10 in Andhra Pradesh, a Central government official said.

A team of National Disaster Response Force (NDRF) comprises about 45 personnel. A Home Ministry statement said based on the decision of the first meeting of the NCMC, headed by Cabinet Secretary Sinha, the central government has already released advance financial assistance of Rs 1,086 crore to Tamil Nadu, Andhra Pradesh, Odisha and West Bengal.

It also asked the people in areas likely to be affected by the storm to remain indoors and advised against operation of motor boats and small ships in the sea. Distant warning signal II (DW-II) has been hoisted in all ports of Odisha and fishermen have been advised not to venture into the sea from Wednesday, the IMD said.

Director of the regional meteorological centre, H R Biswas said the impact of Cyclone 'Fani' is likely to be much more severe than 'Titli', which had hit the Odisha-Andhra coast last year and killed at least 60 people.