India   All India  01 May 2019  Army finds ‘Yeti footprints’ in Himalayas
India, All India

The pictures were sent by the team using satellite communications. 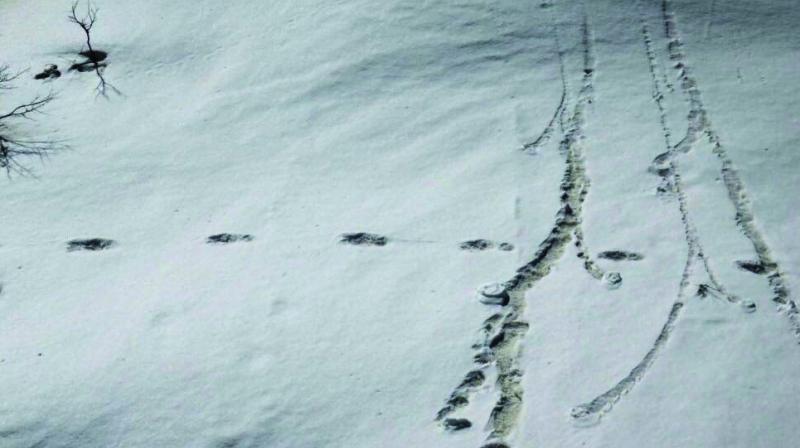 A picture released by the Army showing mysterious large footprints in the snow at Makalu base camp in Nepal.

New Delhi: The elusive “Abominable Snowman” roaming secretly in the high Himalayas was in the limelight after the Indian Army on Tuesday released pictures taken by its mountaineering expedition team of giant footprints in the snow at Makalu base camp in Nepal, which it claimed could belong to the mythical “Yeti”.

A mountaineering expedition led by Maj. Manoj Joshi to Mount Makalu, while acclimatising at Langmale Kharka on April 9, saw a series of huge mysterious large footprints, measuring 32 inches by 15 inches.  The pictures were sent by the team using satellite communications.

“For the first time, an Indian Army mountaineering expedition team has sighted mysterious footprints of the mythical beast ‘Yeti’... This elusive snowman has only been sighted at Makalu-Barun National Park in the past,” said a tweet by the Indian Army.

“It is based on physical proofs of on the spot narration and photos. We got the inputs about 10 days back and yet we held on to it. But then we decided that there is photographic evidence which match with earlier theories,” said a source.

The source said the tweet was not intended to create a buzz.

“The idea is to share, so that the issue can be addre-ssed in a scientific way,” the source added.

“As they say, nature, history and science never write their final story.”

There has been no credible scientific evidence till now to prove the existence of the Yeti, but movies and serials kept interest on the mythical creature alive.

The Yeti folklore started in Nepal where it is depicted as a mythical ape-like huge creature roaming in the Himalayas.

It also caught the fancy of the West in the 19th century, and a series of movies, books and serials were made on it. It also made an appearance in the Tintin comic series, increasing curiosity around the Yeti. Since then, people have claimed to have sighted the Yeti all around the world.

The team is now at the Makalu base camp and likely to attempt the Makalu summit in the second week of May.

It is expected to return to India by the last week of May or the first week of June. The team will hand over these photographs and videos to subject experts on their return, Army sources said. Some people have also criticised the release of the pictures and the claims of then being Yeti footprints.

The team to Mount Makalu (8,485 metres) consists of 18 members (four officers, two JCOs and 11 other ranks), and was flagged off from New Delhi on March 27. The team began its journey to the Makalu base camp on April 2.

Mount Makalu is the world’s fifth highest peak, located in the Mahalangur Himalayas, 19 km southeast of Mount Everest, on the border between Nepal and Tibet, China. The peak got its name from the Sanskrit word Maha-Kala, which means “Big Black” and is one of the names of Lord Shiva.

Though the hunt for the mythical beast stretches back centuries, tales of a wild hairy beast roaming across the Himalayas captured the imagination of climbers in Nepal in the 1920s, prompting many, including Sir Edmund Hillary, to go looking for the creature.

A 2017 DNA study of purported Yeti samples from museums and private collections provided insight into the origins of this Himalayan legend.