Satellite ‘gift’ to South Asia on May 5, says Modi

PM also stressed the relevance of the teachings of Lord Buddha in the present-day world. 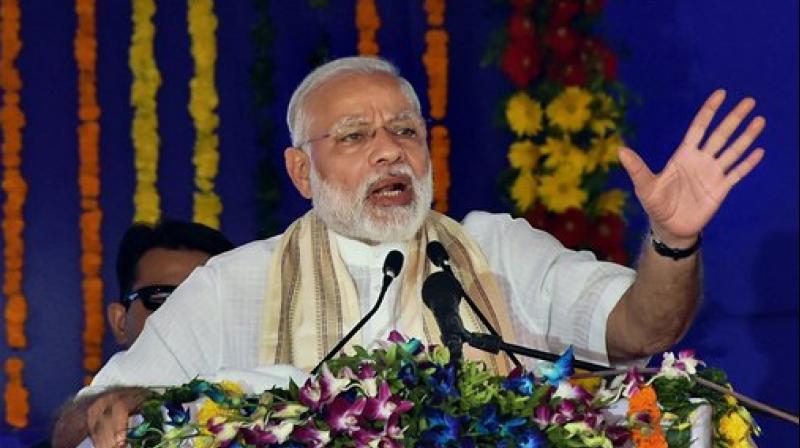 New Delhi: Prime Minister Narendra Modi said on Sunday that the ban on the use of red beacons, which comes into force Monday, was aimed at removing “VIP culture” from the minds of certain people, and replace it with the concept of “Every Person is Important”. Addressing the nation through his 31st “Mann Ki Baat” monthly radio address, the PM also pushed for more digital transactions and announced the South Asia Satellite’s launch on May 5.

Referring to the April 19 Cabinet decision to ban the use of red beacons from May 1, he said all 125 crore people in the country had equal value and importance for the government, adding: “Generally, there is an atmosphere of hatred for VIP culture in the country. How deep it is I realised only recently when the government decided that howsoever big a person may be, he can’t move around in a vehicle using a red beacon.”

The PM said that the South Asia Satellite, that India will launch on May 5, will be the nation’s “priceless gift” to its neighbours as part of the “sabka saath, sabka vikas” concept. Seven out of eight Saarc countries are a part of this project, while Pakistan refused to join as it did not want a “gift” from India. The nations participating in the project are India, Sri Lanka, Nepal, Bangladesh, Bhutan, Maldives and Aghanistan. Mr Modi said the satellite will go a long way in meeting the development needs of these countries.

Under the April 19 Cabinet decision, all VIP vehicles, including those used by the President, Prime Minister, governors, chief ministers, Central and state ministers and judges of the Supreme Court and high courts, are barred from using red beacons.

“Although the ‘lal batti’ is gone now, nobody can claim that because of this the VIP culture, which has gone into mindsets, will also have gone,” Mr Modi said. He said that with concerted effort, this “VIP culture” can also be removed from people’s mindsets.

The Prime Minister sought the support of young people for pushing digital payments to capitalise on a scheme that entails cash rewards for those encouraging others to use the government’s Bharat Interface for Money (Bhim) app for transactions. He said the scheme was valid till October 14, and youngsters can benefit monetarily. “If you make 20 people do it in a day, you can earn Rs 200 that day,” the Prime Minister said.

In his radio speech, the PM also stressed the relevance of the teachings of Lord Buddha in the present-day world, which was “going through problems like violence, wars, destruction and the arms race”. He also referred to the problem of climate change and the increasing duration of summer. Mr Modi stressed the need to save birds and animals from the heat by adopting a humane approach.