Men, aged between 20-25 years, were severely beaten up by the mob, who alleged that they were involved in cow theft. 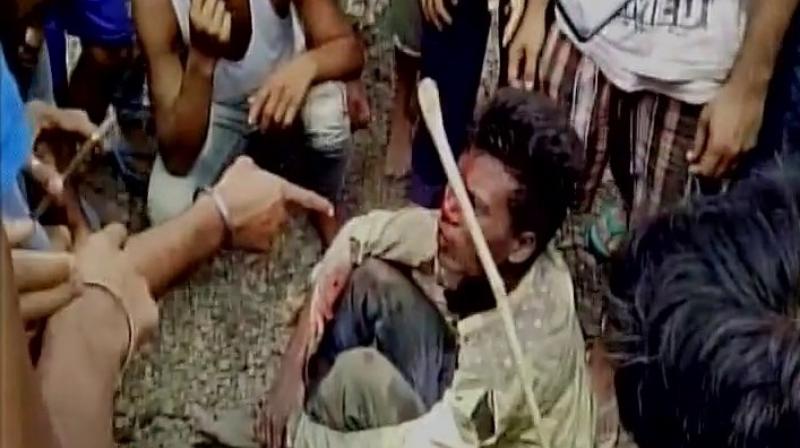 The mob continuously thrashed them with sticks while chasing them for about 1.5 km. (Photo: ANI Twitter)

Guwahati: Police today detained two persons in connection with the alleged lynching of two suspected cattle thieves in central Assam's Nagaon district but refrained from terming it as a case of 'cow vigilantism'.

District Superintendent of Police Debaraj Upadhay said, "We have picked up two persons in this connection and after investigation as to whether they were involved in yesterday's lynching incident, we will arrest them."

In a first case of cow vigilantes going to the extremes in Assam, a mob on Sunday lynched two men in Nagaon district suspecting them to be cattle thieves.

Senior police officials said the men, aged between 20-25 years, were severely beaten up by the mob, who alleged that they were involved in cow theft.

"When the police reached the spot, they were being thrashed by a mob of villagers near Kasamari grazing reserve under Nagaon police station," Nagaon superintendent of police Debaraj Upadhay said.

"The team immediately took the men to hospital, where they succumbed to their injuries," he added.

Upadhay said the men were identified and their parents have registered a complaint with the police.

A case has been lodged and investigation is on, the SP said, adding no arrest has been so far.

Asked if it is a case of "cow vigilantism", the senior official said a lot of cattle theft incidents have happened in Nagaon. "In this case, I got reports that some people saw the two men trying to take away cows from the field and called more people from the village. When a large crowd gathered, they started thrashing them badly," he said.

The SP has assured of an "impartial enquiry" into the episode.