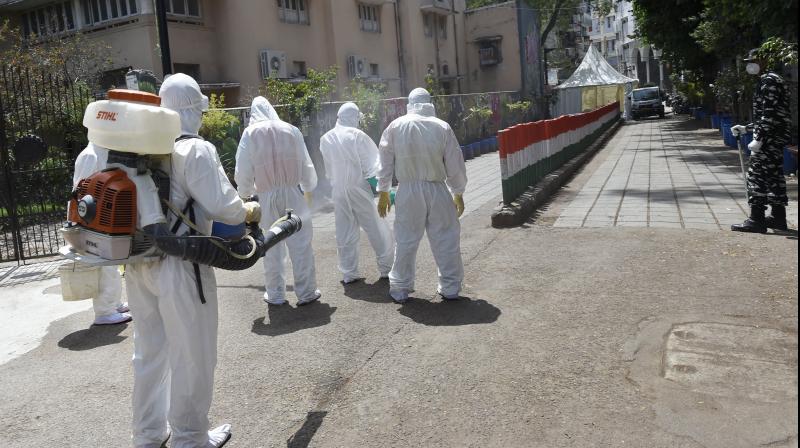 Health workers sanitise their collegues after disinfecting an area near Nizammuddin mosque, in the wake of coronavirus pandemic, in New Delhi on Wednesday. PTI photo

The Delhi police on Tuesday registered a case against Maulana Saad and others under various sections of the IPC and the Epidemic Diseases Act for violation of government directives given to the management of the Markaz of Basti Nizamuddin.

The government said so far 1,582 Tabligh Jamaat workers were shifted to the Narela, Sultanpuri and Bakkarwala quarantine facilities that included 441 admitted in hospitals.

The police said an FIR was filed against Maulana Saad and others of Tablighi Jamaat for violation of the directives issued after the coronavirus outbreak. Over 3,000 people had gathered March 1-18 at the Nizamuddin Markaz mosque for a Tablighi Jamaat meet.

A senior police official said the FIR was filed under Section 269, 270, 271 and 120B IPC at the Nizamuddin police station.

“The organisers violated government directions on restrictions on social/political/religious gatherings and taking safety measures, including social distancing,” the official said.
Delhi CM Arvind Kejriwal has appealed to religious leaders, irrespective of faith, to not organise any event during the lockdown.

The Delhi police special branch on Tuesday asked the Delhi government to take immediate action on at least 157 persons, mostly foreign nationals, linked to the Talbigh Jamaat now staying at various masjids and other places in and around Delhi.

These include 94 from Indonesia, 13 from Kyrgyzstan, nine from Bangladesh, eight from Malaysia, and some Indian nationals. The police warned no “social distancing” is possible at these places and there was a grave public health risk.