Men were seen cheering for the Uttar Pradesh Chief Minister and chanting 'Yogi Yogi' loudly along with his friends. 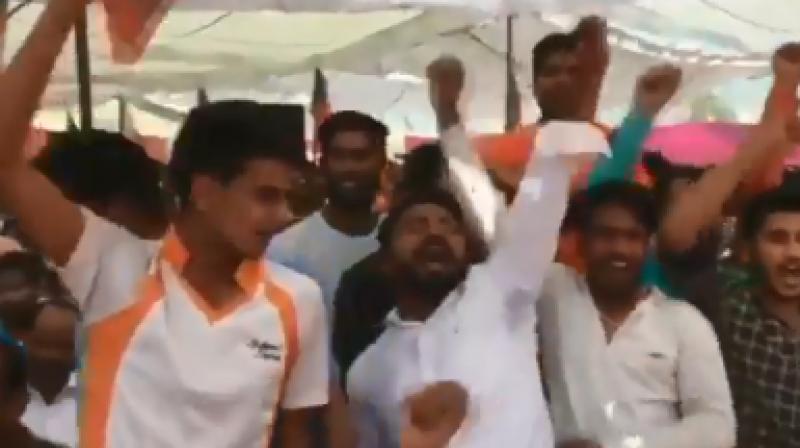 Mohammad Akhlaq's alleged killers are out on bail and were in the front row at the rally, including one Vishal.

Men were seen cheering for the Uttar Pradesh Chief Minister and chanting “Yogi Yogi” loudly along with his friends.

#WATCH: One of the accused in September 2015 Mohd Akhlaq lynching case, Vishal Singh (bearded man in white shirt), was seen in a BJP rally in Bisada village yesterday. The rally was addressed by CM Yogi Adityanath. (31.03.2019) pic.twitter.com/QViy7LoUWV

Of the 18 persons accused in the case, 17 are out on bail while one died inside jail due to dengue.

Asking about where are the other accused is, Singh said, “I do not know exactly where they are. I guess they may be in the rally doing their own job.”

55-year-old Mohammad Akhlaq was dragged out of his home and lynched by a mob in September 2015 over a suspicion that he killed a cow and stored its meat. Akhlaq’s son Danish was also beaten up brutally. Akhlaq’s family was forced to leave the village.

Raising the incident at the rally, Yogi Adityanath said, “Who doesn't remember what happened in Bisara? Everybody knows it. How shamefully the Samajwadi Party government tried to suppress the sentiments then. I can say as soon as our government was formed we got all illegal slaughter houses stopped in one go and ensured its strict implementation."

Adityanath accused the SP and BSP government in the past of “dividing people on the basis of caste”.

Ever since the village shot to the limelight, the Bharatiya Janata Party (BJP) has organised many important rallies at this village just before elections.