It’s time to rescue the chickens!

In many Central European folk tales, the devil is believed to flee at the first crowing of a cock. 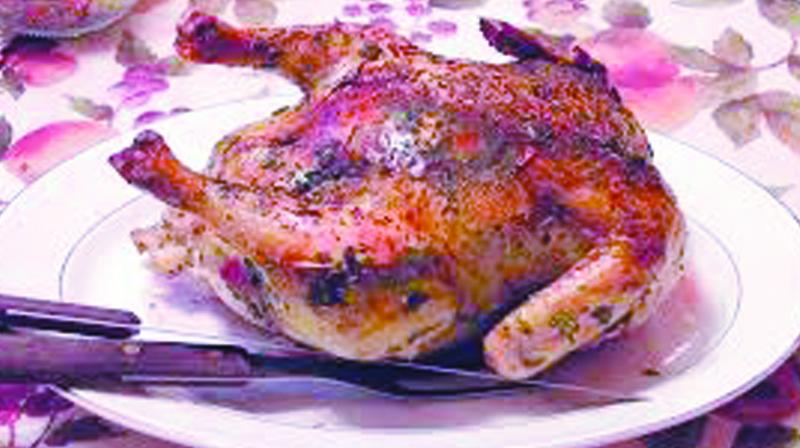 The sacrifice of the chicken is to receive atonement, for the bird takes on all the person’s sins in kapparos.

The Indian wild fowl is the ancestor of all the world’s domestic chickens and also of pheasants and even the peacock. It is truly a remarkable bird and must be venerated in the land of its origin instead of being bred in wire cages, fattened with composite foods, steroids and antibiotics, and slaughtered by the millions each day.

In ancient Greece, the chicken was not normally used for sacrifices, perhaps because it was still considered an exotic animal. Because of its valor, cocks are found as attributes of Ares, Heracles and Athena. The alleged last words of Socrates as he died from hemlock poisoning, as recounted by Plato, were “Crito, I owe a cock to Asclepius; will you remember to pay the debt?” signifying that death was a cure for the illness of life.

The Greeks believed that even lions were afraid of cocks. Several of Aesop’s Fables reference this belief. In the cult of Mithras, the cock was a symbol of the divine light and a guardian against evil.

In the Bible, Jesus prophesied the betrayal by Peter: “And he said, I tell thee, Peter, the cock shall not crow this day, before that thou shalt thrice deny that thou knowest me.” (Luke 22:43) Thus it happened (Luke 22:61), and Peter cried bitterly. This made the cock a symbol for both vigilance and betrayal.

Earlier, Jesus compares himself to a mother hen, when talking about Jerusalem: “How often would I have gathered thy children together, even as a hen gathereth her chickens under her wings, and ye would not!” (Matthew 23:37; also Luke 13:34).

In many Central European folk tales, the devil is believed to flee at the first crowing of a cock.

In traditional Jewish practice, a chicken is swung around the head and then slaughtered on the afternoon before Yom Kippur, the Day of Atonement, in a ritual called kapparos. The sacrifice of the chicken is to receive atonement, for the bird takes on all the person’s sins in kapparos. The meat is then donated to the poor. A woman brings a hen for the ceremony, while a man brings a rooster. Although not actually a sacrifice in the biblical sense, the death of the chicken reminds the penitent sinner that his or her life is in God’s hands.

The Talmud speaks of learning “courtesy toward one’s mate” from the rooster. This might refer to the fact that, when a rooster finds something good to eat, he calls his hens to eat first.

Talking about cock veneration. The late Col.Mobutu the long time Zaire dictator and kleptomaniac, took a Congolese name which translated simply meant - the cock that leaves no hen untouched! The French rugby team has a rooster as its symbol.

The chicken is one of the Zodiac symbols of the Chinese calendar. Also in Chinese religion, a cooked chicken as a religious offering is usually limited to ancestor veneration and worship of village deities. Vegetarian deities such as the Buddha are not one of the recipients of such offerings. Under some observations, an offering of chicken is presented with “serious” prayer (while roasted pork is offered during a joyous celebration). In Confucian Chinese Weddings, a chicken can be used as a substitute for one who is seriously ill or not available (e.g. sudden death) to attend the ceremony. A red silk scarf is placed on the chicken’s head and a close relative of the absent bride/groom holds the chicken so the ceremony may proceed. However, this practice is rare today.

Surely it deserves a better fate than end up in a tandoor or as butter chicken. If beefsteak is to become taboo, there is just as much a case for making fried chicken taboo.

The writer, a policy analyst studying economic and security issues, held senior positions in government and industry. He also specialises in the Chinese economy. This piece was specially written for publication on April 1.