Despite shying away from history, Pak honours Bhagat Singh legacy

The Bhagat Singh Archives and Resource Centre has 300 books on Bhagat Singh which will be useful for research scholars. 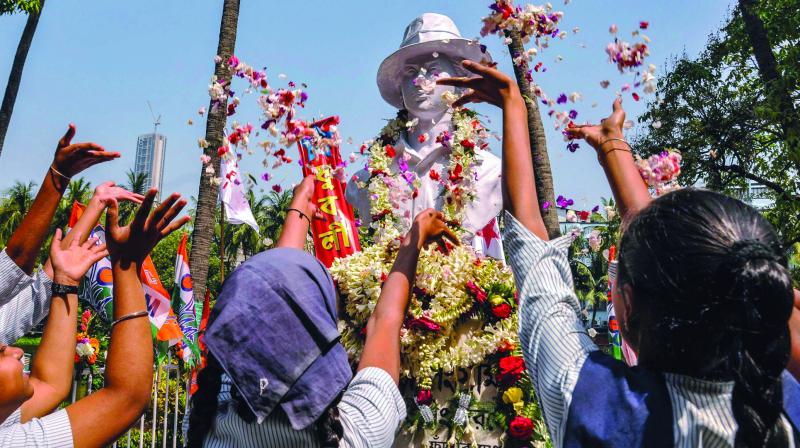 Students in Kolkata pay a floral tribute to the martyr. (Photo: PTI)

On March 23, 2019, a function to commemorate the martyrdom of Bhagat Singh, Shivram Rajguru and Sukhdev Thapar, was organised by the Delhi Archives. Marking 88 years of their martyrdom and the completion of one year of the Bhagat Singh Archives and Resource Centre at Delhi Archives, the chief guest on the occasion was Bhagat Singh’s brother, Ranvir Singh’s son, Maj. Gen. Sheonan Singh (retd). He and his cousin Abhay Singh Sandhu, also present, released a brochure. The Bhagat Singh Archives and Resource Centre has 300 books on Bhagat Singh which will be useful for research scholars.

While this event did not make much news in India, it did so in Pakistan and even amidst all the tension and sparring following the February 14, 2019, terrorist attack by Pakistani terrorist group Jaish-e-Mohammed, the Kartarpur corridor controversy and the conversion and forced marriage of Hindu girls. The observance of the martyrdom anniversary of Bhagat Singh and his associates in Pakistan only goes to prove that the sane constituency there still manages to identify with India, albeit seldom.

The 88th anniversary of the martyrdom of these three great revolutionaries, who were hanged in Lahore, was reportedly observed in that city amid tight security. This day has been observed in Lahore every year, despite threats from fundamentalists, by the Bhagat Singh Memorial Foundation (BSMF), founded by activist and lawyer Imtiaz Rashid Qureshi with the aim of proving Bhagat Singh to be innocent of the murder of the British Raj police officer John P. Saunders. Bhagat Singh, Shivaram Rajguru and Sukhdev Thapar were hanged in 1931 after being found guilty of conspiracy against the Raj. Mr Qureshi believes that this is a fabricated case and maintains that Singh is a hero to people in Pakistan as well.

Also recently, the Lahore district administration, for the first time, named Shadman Chowk (aka Fawara Chowk) in Lahore Bhagat Singh Chowk and recognised him as a revolutionary. Shadman Chowk is the place where the three young revolutionaries were hanged by the British on March 23, 1931. It was then a part of the grounds of Lahore’s Central Jail.

“We have been demanding a statue of Bhagat Singh be put up at this place… We have also been moving to award him Nishan-e-Hyder… the administration has recognised him as a martyr, which is a good initiative,” Mr Qureshi said.

Mr Qureshi has reportedly vowed to make the British government pay a heavy sum as compensation to the families of the martyrs. He moved the Lahore High Court to reopen a 90-year-old case concerning the murder of Saunders in 1928. Speaking to the media, he discussed his wish to seek huge compensation from Britain for both India and Pakistan over the judicial killing of Bhagat Singh, Rajguru and Sukhdev, who were hanged 11 hours before their scheduled time of execution.

Mr Qureshi has also alleged that Bhagat Singh’s name is not even mentioned in the FIR registered in December 1928 at Lahore’s Anarkali police station. Speaking to the media, he said, “I will file an amended appeal in the case, which I had filed in March 2013, seeking an apology from the British Prime Minister and the Queen of England to the people of India and Pakistan for hanging the trio… If the previous UK Prime Minister David Cameron can visit Jalianwala Bagh and express regret, then why can’t the current PM Theresa May do the same?” he was quoted. He also mentioned the hurdles he has been facing in his quest. The FIR stated that the Saunders’ assailant was “five feet and five inches tall, had a small moustache, was slim with a strong body and wore white trousers (pyjama) and a grey shirt (kurta) along with a small black christi-like hat,” Mr Qureshi said. “I went to get a copy of the FIR filed in the John Saunders case and the police at Anarkali police station in Lahore asked me to pay a bribe. I refused
and filed a compliance petition with Lahore High Court. It was only then that a DSP rank officer submitted a sealed copy of the FIR in the high court. The copy was so important that even the judges asked me to see it.”

“We are not debating if Bhagat Singh killed Saunders or not, but the evidence on the basis of which he was hanged. The FIR did not contain his name, over 300 witnesses named in the case were not questioned and yet he was hanged on the order of registrar of the Lahore High Court,” he added.

In 2016, the Lahore High Court granted a request from Mr Qureshi for Bhagat Singh’s case to be re-opened to prove his innocence, following an earlier order of the court in 2014 that had led to the discovery of the original December 1928 First Information Report (FIR) relating to Saunders’ murder. The high court requested in 2016 that the Chief Justice of Pakistan appoint a larger bench to adjudicate but nothing further had happened by September 2017 when Mr Qureshi filed a new petition in the hope of gaining a hearing within a month. Mr Qureshi argues that the FIR referred only to two “unknown gunmen”, rather than to Singh, and that the tribunal that was convened to determine the case neither heard the 450 witnesses in the case nor permitted Singh’s lawyers to cross-examine them.

Apart from efforts for a statue to be erected at Shadman Chowk, the BSMF has also been involved in other aspects of commemoration and seeks to promote Singh worldwide through seminars and similar activities. In 2016, the organisation obtained the support of the state government of Punjab, India, in its efforts to build a memorial at Singh’s birthplace at Banga, Faisalabad district, Pakistan. They were promised that the government would pay for the purchase of the family house in the village for that purpose.

While Mr Qureshi has claimed that Shadman Chowk was renamed as Bhagat Singh Chowk due to the efforts of the BSMF, this change was successfully challenged in a Pakistani court. On September 6, 2015, the BSMF filed a petition in Lahore High Court, which again demanded the renaming of the Chowk to Bhagat Singh Chowk.

Pakistan’s government and the army, which still calls the shots, are quite allergic to pre-Pakistan Indian history, resulting in it being suppressed or selectively “altered”. Examples of alterations include emperors Akbar, Jehangir and Shah Jahan, who are considered comparatively liberal or pro-Hindu, being deleted from Mughal history and Pakistan’s fabricated versions of its wars and conflicts against India.

However, while many Hindu temples or shrines have been destroyed or defaced in Pakistan, there are still various Muslim ones in its interior areas where Hindu practices and customs are still followed. Perhaps, this is so owing to the peculiarities of human faith, which have escaped the government’s or the army’s writ. In his book, In Search of Shiva: A Study of Folk Religious Practices in Pakistan, which was reviewed by this writer, Haroon Khalid discloses the customs practised in many such shrines.

Khalid, who studied anthropology at the Lahore University of Management and Sciences, has travelled extensively around Pakistan, documenting the country's historical and cultural heritage. Having authored two more books and written over 200 articles for newspapers and magazines, he has also commented on the Pakistani establishment’s “sensitivities” about Indian and Pakistani history.

Khalid’s wife, Anam Zakaria, has authored two books, The Footprints of Partition: A Narrative of Four Generations, and Between the Great Divide. This author had the pleasure of meeting the young couple in Delhi a couple of years ago, when they came to have their books, Shiva and Footprints, launched. Having reviewed these two books and some others by Pakistani authors, and spoken at length with them, this writer has come to learn that most Pakistani authors who write about Pakistan’s pre-independence past, or against the Pakistani establishment, or in favour of India, cannot get their books published in Pakistan. And those who have written against the army are either living outside Pakistan or have been killed. Journalist Saleem Shahzad, who wrote Beyond Bin Laden and 9/11: Inside the Taliban and Al Qaeda, is one such writer who was killed in 2012. Hassan Abbas, who boldly wrote Pakistan’s Drift Into Extremism, is another who lives in virtual exile.

Activists like Qureshi and authors like Khalid, Zakaria, Abbas, Mujahid Hussain (Punjabi Taliban, published by Pentagon Press, India) and a few others deserve credit for their hard work and courage. People on both sides of the border should read their works and stories.