The service robot, as Rudranarayan claims, will assist him and his family members with some of the household chores. 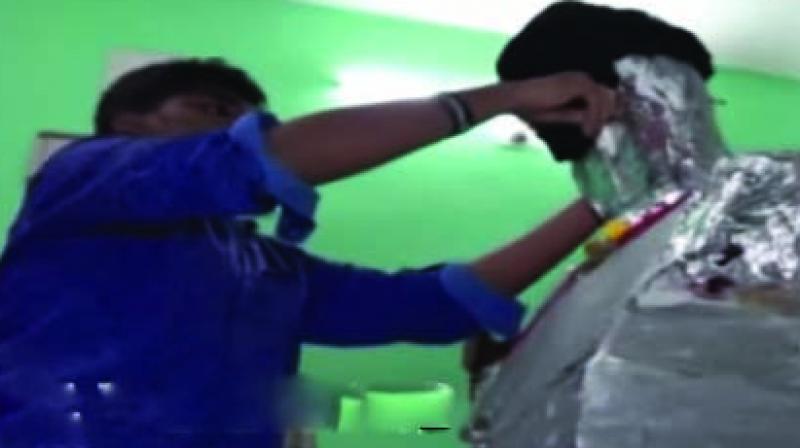 BHUBANESWAR: Rudranarayan Samal, a Class IX student of IFCO DAV school,at Paradip in Odisha has become the talk of the town as he has succeeded in crafting and developing a basic version of a service robot.

The service robot, as Rudranarayan claims, will assist him and his family members with some of the household chores.

He said he assembled a few electronic gadgets, thermocol and cardboard to create the service robot. With non-collision sensors, it has been designed in such a way that it responds to almost all queries in a manner the Bluetooth-connected devices respond.

Recently, a realistic humanoid robot ‘Sophia’ was developed by Hong Kong-based company Hanson Robotics, which is capable of displaying human-like expressions and interacting with people. It was designed for research, education, and entertainment, and helps promote public discussion about Artificial Intelligence ethics and the future of robotics.

It is Sophia’s invention which inspired Rudra to come up with this project, though this is not a homogenous model. He discussed the project with his teacher and then decided to go on with his plan. Be it for children’s amusement or helping elders, the robot will serve a purpose to everyone, feels Rudranarayan. “I have created this multifunctional robot so that it can be used for carrying small goods. It can also act as a waiter and help elders in their homes by serving food. This apart, it is designed to answer all questions,” said the student.

Explaining more on his upcoming project ideas, the young genius says he has planned to develop a ‘third eye’ for visually handicapped people and a smart chair for the divyangs.

He has also designed organic farming equipment for the benefit of farmers.