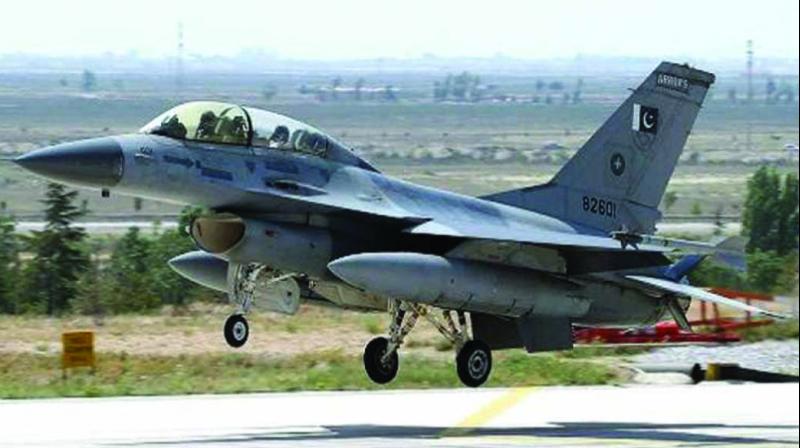 India is likely to give the wreckage of the missile to US. (Photo: File)

“The difference between a MiG-21 Bison and F-16 is like between a vintage Maruti 800 and top end Mercedes-Benz,” said defence sources.

Wg. Cdr. Varthaman’s MiG-21 was shot and he bailed out after bringing down one Pakistani F-16 fighter during a dogfight to repel a Pakistani attack on Wednesday morning. He has been in Pakistan since then.

On Thursday, India exposed Pakistan’s lie that it did not use F-16 on Wednesday, an attempt by Islamabad to cover up its blatant violation of an agreement with the US that bars it from using the hi-tech jets for attacking India or any other country.

Air Vice Marshal R.G.K. Kapoor, assistant chief of Air Staff, during a joint media briefing along with the Navy and Indian Army officials, showed media persons the wreckage of Amraam missile which Pakistan can only use in F-16, busting their claims that they never used F-16. The wreckage of the missile fell in the Indian territory during Wing Commander Varthaman and his colleagues’ dogfight with Pakistani fighters. The missile fired by F-16s had failed to hit Indian MiG-21s. India is likely to give the wreckage of the missile to the US.

The advanced Amraam missiles allow a pilot to target an enemy aircraft that are beyond their visual range in day or night, and in all weather. While R-73 air-to-air missile of MiG-21 have a short range.

There is also a possibility that the Pak F-16s used on Wednesday were either manufactured or upgraded in Turkey, said sources.

To counter Pakistan’s denial on using F-16s, the IAF also talked of releasing video of the dogfight during which Wing Commander Varthaman went after an F-16. “We have got a video,” said sources.

Talking about the strike by IAF in Pakistan territory on Tuesday, the IAF said that it has “fairly credible evidence” that there was intended damaged on Jaish-e-Mohammed’s (JeM) Balakot camp in Khyber Pakhtunkhwa and it was for the Indian government on how to share it.

Giving details of Pakistan jets’ attempt to hit Indian military installation fight on Wednesday, sources said that some 24 Pak air fighters approached India along the LoC. Out of these three-four Pakistani F-16 entered Indian airspace which could have hit brigade headquarters. Soon IAF planes, which included Sukhoi, MiG-21 and Mirage, were scrambled to intercept them. Two MiGs being near these Pakistani planes intercepted them. An airborne early warning and control (Aewc) aircraft too came near them and took over and started giving commands to MiGs.

Wg Cdr. Varthaman came close to one of the two-seater F-16 and start chasing it. The F-16 started turning and soon a close dogfight ensured. The planes started moving up and down. Wg. Cdr. Varthaman fired the R-73 air-to-air missile bringing it down. In the process, his MiG-21 also got hit either near the LoC or in Pakistan Occupied Kashmir (PoK).

Sources said Wg. Cdr. Varthaman achievement is significant because F-16 is a much superior plane as compared to MiG-21 and it had proved in during the Gulf war that it has higher manoeuvre capability, better speed, radars and systems. Despite this, Wg. Cdr. Varthaman was able to engage it in a dogfight. The hit on F16 was confirmed by the other MiG-21. Also, Indian Army aviation officials at the border saw the F-16 going down and two pilots bailing out using parachutes.

In the initial statement, the Pakistan Army had talked of three Indian pilots being captured. But later, it changed its statement and said that Pakistan had captured only one Indian pilot. It seems that the two other pilots were those flying F-16 and hit by the MiG-21.

According to reports emerging from Pakistan, when Wg. Cdr.Varthaman touched the ground in Pakistan-occupied Kashmir (PoK) he asked the locals, who had surrounded, him if he was in India or Pakistan. Some of the locals told him that he was in India. Dawn newspaper said that then Indian pilot told them his “back had broken” and he needed water to drink. Some youngsters at that point started shouting “Pakistan Army zindabad”.

Immediately sensing his circumstances, Wg. Cdr.Varthaman shot fire in the air even as the youth picked up stones in their hands, said the newspaper.

“The Indian pilot ran a distance of half a kilometre in backward direction while pointing his pistol towards the youth who were chasing him,” the Dawn reported. “During this brisk movement, he fired some more gunshots in the air to frighten them but to no avail. Then he jumped into a small pond where he took out some documents and maps from his pockets, some of which he tried to swallow and soaked others in the water,” the report said.