The co-passengers expressed their gratitude with a standing ovation to Varthaman’s parents, who were on the Chennai-Delhi flight. 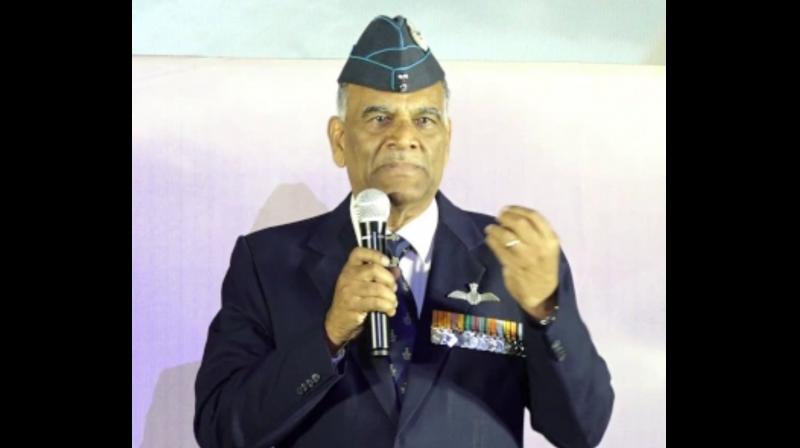 The father of Abhinandan Varthaman, Air Marshal S Varthaman (pic) is a highly-decorated officer and his mother Shobha Varthaman is a doctor. (Photo: Twitter)

New Delhi: The nation observed a moment of joy on Thursday after the Pakistan Prime Minister announced the release of the Indian Air Force pilot Wing Commander Abhinandan Varthaman on Friday.

The co-passengers expressed their gratitude with a standing ovation to Varthaman’s parents, who were on the Chennai-Delhi flight late on Thursday night to welcome their son.

When the flight was about to land in Delhi, co-passengers realised who Retd Air Marshal S Varthaman and his wife were, they stood up in respect to them, cheered, clapped for the Varthaman family’s bravery, ignoring the seatbelt announcement made by the crew.

Also, they waited on their seats and allowed Varthaman’s parents first to exit.

Wing Commander #AbhinandanVartaman 's parents reached Delhi last night from Chennai. This was the scene inside the flight when the passengers realized his parents were onboard. They clapped for them, thanked them & made way for them to disembark first. #Respect #AbhinandanMyHero pic.twitter.com/P8USGzbgcp

Soon after landing to Delhi, Varthaman family left for Amritsar to receive their son, who will be released by Pakistan as a “gesture of peace” through the Wagah-Attari joint check-post around 2 pm.

Air Marshal S Varthaman, a recipient of several honours, including a Param Vishisht Seva Medal, said in a message, "Abhi is alive, not injured, sound in mind, just look at the way he talked so bravely... a true soldier... we are so proud of him."

Wing Commander Abhinandan comes from a family which has served Indian Air Force since the World War II days, when his grandfather Simhakutty was a member of the force. The father of Abhinandan Varthaman, Air Marshal S Varthaman is a highly-decorated officer and his mother Shobha Varthaman is a doctor.

The 35-year-old Wing Commander Abhinandan Varthaman was flying the MiG-21 Bison that shot down the PAF F-16 in the aerial engagement with Pakistan on Wednesday morning.