Badruddin Ajmal said he and his 13 MLAs plan to meet the President, PM to register their concern about the Army chief’s comments. 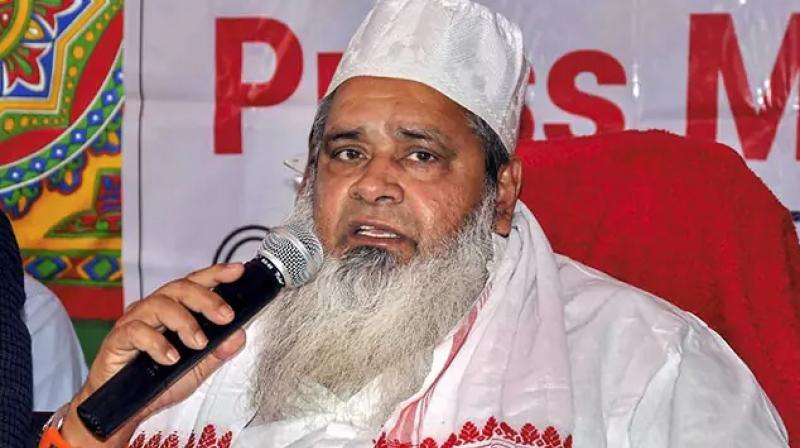 AIUDF chief Badruddin Ajmal said, 'It was the BJP that registered a 600 per cent increase in strength in 2014. Surely, that deserves attention, not us.' (Photo: File/PTI)

New Delhi: Days after Gen Rawat’s controversial statement comparing the growth of the All India United Democratic Front (AIUDF) to that of the BJP triggered a row, AIUDF president Badruddin Ajmal proposed to meet Army chief over tea and sweets and make him aware of the facts.

According to a report in The Indian Express, Badruddin Ajmal, who is in Delhi, said, “I will visit him and drink tea with him and eat mithai (sweets) too with him, despite being a diabetic, and apprise him of the facts about the AIUDF. I will, as we don’t have any guilt about who we are and what we do. He must be made aware of the facts.”

While addressing a seminar in Delhi on February 21, Gen Rawat had said, “There is a party called AIUDF, if you look at. They have grown in a faster time-frame than the BJP has grown over the years. When we talk of Jana Sangh with two Members of Parliament and where they have reached, AIUDF is moving at a faster pace in the state of Assam. Finally, what will be the state of Assam, we will have to take a call.”

The Army chief had to face a lot of backlash over the remarks which were described as being political and displaying partisanship.

Ajmal and some colleagues also met Home Minister Rajnath Singh on Tuesday with a two-page memorandum, seeking his intervention to dispel all confusion created after Gen Rawat’s statement.

Ajmal said that the meeting was also meant to convey the “great shock and surprise” over the fact that the Army chief “has not been correctly informed regarding the role of the AIUDF in the public life of Assam, as well as the facts of illegal infiltration in the state”.

Ajmal further said he and his 13 MLAs plan to meet the President and register their concern about the Army chief’s comments, and also meet Prime Minister Modi “when Parliament convenes” as well as National Security Adviser Ajit Doval.

“We have utmost confidence in the Army for its ability to stay vigilant and guard our borders so we can sleep peacefully and educate our children and go about our lives. We are grateful to them. That is why such a remark by the Army chief puzzles us,” Ajmal said.

“I cannot guess what he meant by saying what he did, he must explain that.”

“It was the BJP that registered a 600 per cent increase in strength in 2014. Surely, that deserves attention, not us,” Ajmal said.

“If the insinuation is that illegal migrants from Bangladesh are voting for us, that is wrong. If there are so many illegals, how did they get the right to vote, those documents? We have never been in power. Those who are in power now and who have been in power must explain. If they are crossing borders. What is the BSF or the Army doing?” he asked.

“We have always been against illegal migration and gave a call to shoot them on the border, something that caused ire among our supporters. But I am all for not fencing but a total sealing of the border, a wall. The BJP must also answer how many foreigners they have been able to root out and send back, ever since they came to power, on precisely this issue,” he added.