Earlier, UP Shia Waqf Board chairman proposed that the mosques built atop destroyed temples to be returned back to Hindus. 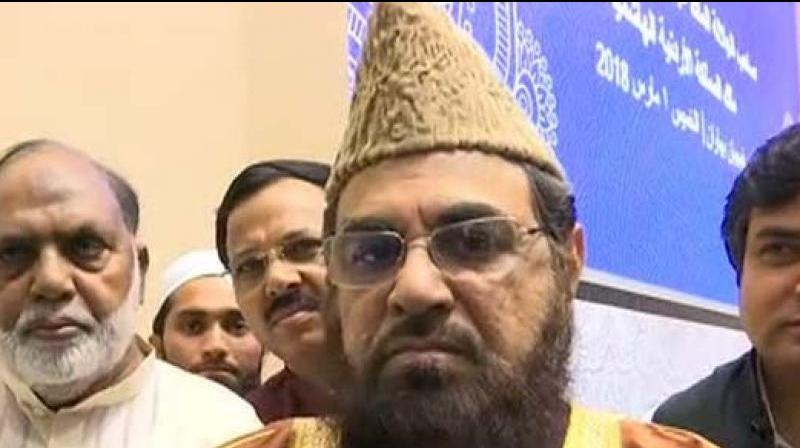 Muslim cleric Sayeed Mufti Mukarram pitched for the unity between Hindus and Muslims and urged people to respect every religion. (Photo: ANI)

New Delhi: Muslim cleric Sayeed Mufti Mukarram on Thursday lashed out at Uttar Pradesh Shia Waqf Board Chairman Wasim Rizvi for his statement on surrendering mosque built atop destroyed temples to Hindus and said that only a person who has lost his mental balance can make such a remark.

Mukarram pitched for the unity between Hindus and Muslims and urged people to respect every religion.

"This is against the Constitution and policy of our country. Only a person who has lost his mental balance can make such a remark," Mukarram said.

"Nothing should be demolished; both temples and mosques will remain wherever they are," he added.

He further said that humanity is above everything and such statements made by Rizvi should be blatantly ignored.

Talking about the Ram Janmabhoomi-Babri Masjid issue and Art of Living (AoL) founder Sri Sri Ravi Shankar mediation, the Muslim cleric said that it is better to leave the matter for the Supreme Court to decide on.

"Not a single leader is there, who is followed by the entire nation. So it is better to follow guidelines of the Supreme Court, which we believe will take a correct decision in the matter," he said.

Earlier on Wednesday, Rizvi proposed that the mosques built atop destroyed temples to be returned back to Hindus.

In his letter to the All-India Muslim Personal Law Board (AIMPLB) Chairman Maulana Rabe Hasan Nadvi, Rizvi urged Muslim board to surrender nine disputed religious places to Hindus, including Ram Temple in Ayodhya.

Rizvi had stated that as per Islamic laws, construction of mosques on a land grabbed by destroying other disputed religious places is illegal.

The letter contains names of nine disputed religious places across the country.