In his letter to the PM, Kharge said the invitation negated the letter and spirit of the Lokpal and Lokayuktas act, 2013. 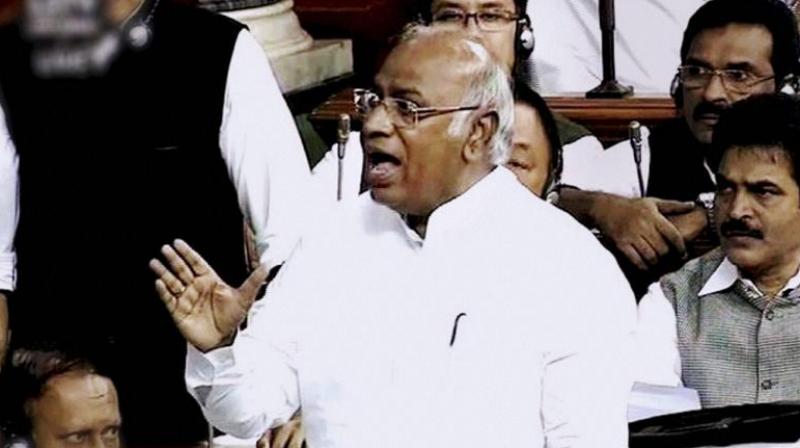 ongress leader Mallokarjun Kharge said the Modi govt had made changes in various statutes such as the Delhi special police establishment (amendment) bill, 2014 to substitute the 'leader of opposition' with the 'leader of the single largest party' in the selection committee. (Photo: File/PTI)

"At the outset, let me state on behalf of myself, my party and the entire opposition that 'Special Invitee Invitation" is a concerted effort to exclude the independent voice of the opposition altogether from the selection process of the most important anti-corruption watchdog," writes Kharge, the leader of the Congress in the Lok Sabha.

Accusing the government of calling today's meeting only to satisfy the order of the Supreme Court on the appointment of a Lokpal, Kharge says, "the conduct of your government only seeks to diminish the spirit and objective of appointment of Lokpal in as much as you seek to deny participation, voice and opinion of the opposition."

In his letter to the Prime Minister, Kharge, who was asked to be a “special invitee,” said the invitation negated the letter and spirit of the Lokpal and Lokayuktas act, 2013.

“It is a matter of surprise that your government is choosing to adopt this route as a mere paper formality rather than seek any meaningful and constructive participation,” he wrote.

The intent and objective of the act reflected that the Leader of Opposition couldn’t be substituted as a special invitee, he said.

Kharge said the Modi government had made changes in various statutes such as the Delhi special police establishment (amendment) bill, 2014 to substitute the “leader of opposition” with the “leader of the single largest party” in the selection committee. 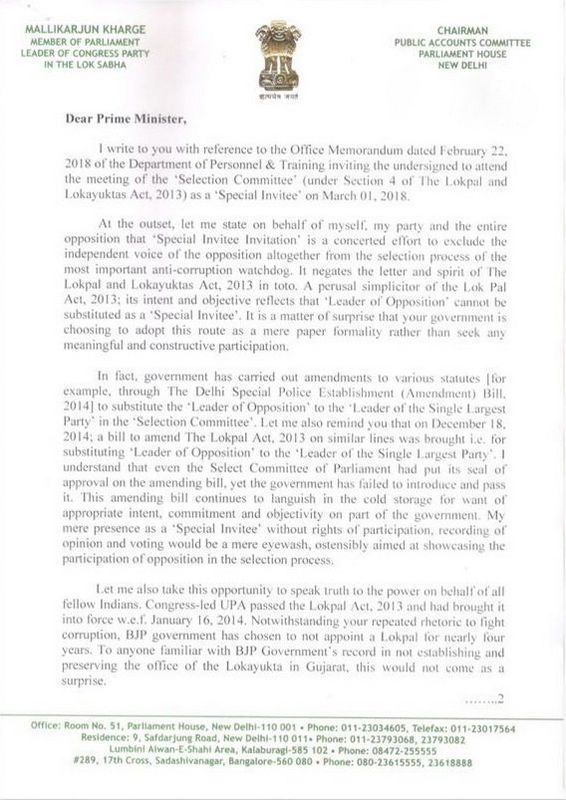 Cong's Mallikarjun Kharge writes to PM over meeting of Select Committee, under Sec 4 of Lokpal and Lokayukta Act, says, 'special invitee invitation is a concerted effort to exclude the independent voice of the opposition from selection of most important anti-corruption watch-dog'. (Photo: ANI | Twitter)

Two weeks ago, the Supreme Court had asked the Centre to submit details on steps it has taken towards appointing a Lokpal, which has been delayed for five years.

In April 2017, SC told the government that the anti-corruption body should be set up without delay and the lack of a Leader of Opposition should not hold up the process. The ruling meant that the government can select a Lokpal without taking the Congress, the main opposition group, on board.

After a nationwide campaign led by Anna Hazare, the law to set up a Lokpal was passed in parliament in 2013 and was enacted in 2014.

The government had told the court that the Lokpal could not be appointed as there was no Leader of Opposition in the selection panel and a change in law that would allow the Congress - as largest opposition group - to be a member has yet to be approved in parliament.

In 2014, the BJP came to power defeating the Congress, which was reduced to just 44 seats in the Lok Sabha - not enough to qualify for Leader of Opposition.

Amid criticism and prodding from the Supreme Court, the government later made a concession and decided to include the largest opposition party in selection panels not just for the Lokpal but also for CBI chief.