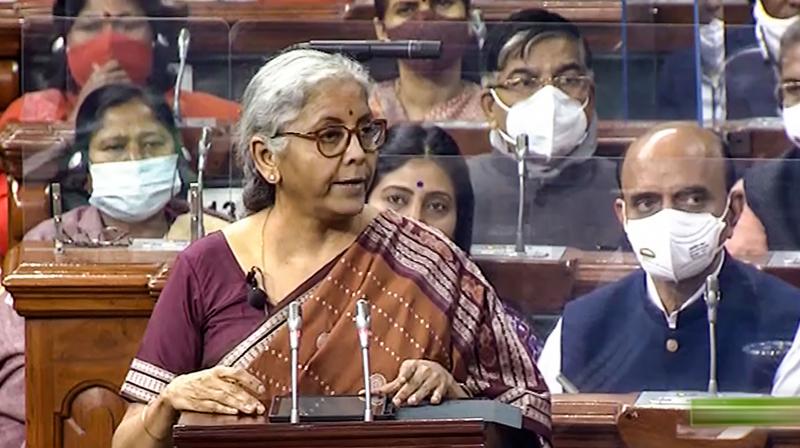 The Union Cabinet on Tuesday approved the Budget 2022-23 which will be presented by Finance Minister Nirmala Sitharaman in Parliament.

The meeting began at around 10:20 am ahead of the Budget presentation.

Prime Minister Narendra Modi, Defence Minister Rajnath Singh, Union Home Minister Amit Shah, Railways, Communications and IT Minister Ashwini Vaishnaw, Parliamentary Affairs Minister Pralhad Joshi, and others were present at the Parliament for the Union Cabinet Meeting ahead of the presenting of the Budget.

The Union Budget 2021 will be presented in a short while from now.

The Minister took a digital tablet wrapped in a traditional bahi-khata style pouch as she headed for Parliament to present the Union Budget 2022-23 in a paperless format just like the last year.

The Budget speech will begin at around 11 am today with Sitharaman beginning it with an address to the speaker of Lok Sabha. Usually, the duration of the presentation ranges from 90 to 120 minutes.

Earlier today, Sitharaman met President Ram Nath Kovind ahead of the Budget presentation. She was accompanied by Ministers of State for Finance Pankaj Chaudhary, Bhagwat Karad and other officials from the Ministry.

Amid the ongoing coronavirus pandemic, replacing her signature 'bahi khata', she opted to carry the documents in a tablet, which was wrapped in a red-coloured cover with the national emblem emblazoned on it.

On Monday, she tabled this year's Economic Survey, centred around the theme of "Agile approach", which forecasted India's economy to grow by 9.2 per cent during Financial Year 2021-22 and by 8-8.5 per cent in fiscal 2023 beginning 1 April.

The Budget Session of the Parliament commenced on January 31 with President Ram Nath Kovind's address.

This Budget continues to provide impetus to growth: FM

2022-23 has been announced as International Year of Millets: FM

100 PM Gati Shakti terminals to be set up in next three years, says FM

Contracts for multi-modal parks at 4 locations to be awarded next fiscal, says FM

Draft DPRs for 5 river links have been finalised, says FM

Recognising the importance of 'Nari Shakti', 3 schemes were launched to provide integrated development for women and children, says FM

Digital university to be set up to provide education; to be built on hub and spoke model: FM

Rs 6,000 crore programme to rate MSMEs to be rolled out over 5 years, says FM

95 per cent of 112 aspirational districts have made significant progress in health, infra, says FM

Natural farming will be promoted along Ganga river corridor: FM

Budget seeks to lay the foundation and give a blueprint of the economy over Amrit Kal of next 25 years - from India at 75 to India at 100, says FM

Govt to promote use of public transport in urban areas: FM

75,000 compliances have been eliminated and 1,486 union laws repealed to make it easier for businesses: FM

E-passport with embedded chip will be rolled out, says FM

A high-level panel to be set up for urban planning: FM

Data exchange among all-mode operators to be brought in on unified logistics interface platform to enable efficient movement of goods: FM

Digital currency will be introduced during 2022-23: FM

400 new generation Vande Bharat trains to be manufactured in next 3 years: FM

4 pilot projects for coal gasification to be set up.

Rs 19,500 cr additional allocation for PLI for manufacturing high efficiency solar modules has been made: FM.

Contracts for laying of optical fibre net to all villages under BharatNet to be provided under PPP mode, says FM

Govt committed to reduce import and promote self reliance in defense sector: FM.

Risks of climate change are strongest externalities for the world: FM.

FM steps up capital expenditure by 35.4 per cent to Rs 7.50 lakh crore

Measures will be taken to step up private capital in infra sector, says FM

To provide an opportunity to correct an error, taxpayers can now file an updated return within 2 years from the relevant assessment year: FM

2,000 km of rail network to be brought under the indigenous world-class technology KAWACH, for safety and capacity augmentation: FM

Both Centre and States govt employees' tax deduction limit to be increased from 10% to 14% to help the social security benefits of state govt employees and bring them at par with the Central govt employees: FM

Animation, Visual Effects, Gaming and Comics (AVGC) sector offers immense potential to employ youth. An AVGC promotion task force with all stakeholders will be set up to recommend ways to realise this and build domestic capacity for serving our markets and the global demand: FM

The gross GST collections for the month of January 2022 are Rs 1,40,986 crores which is the highest since the inception of GST: FM

Remarkable progress made in GST regime, there are still few challenges remaining: FM.

GST revenues are buoyant despite the pandemic, says FM.

No set off of any loss will be allowed on undisclosed income detected during search and seizure operations, says FM

Surcharge on long-term capital gains capped at 15 per cent: FM.

PM's Development Initiative for North East to be implemented through North Eastern Council, initial allocation of Rs 1,500 cr for scheme

30 pc tax on income from transfer of virtual digital assets; no deduction on expenses except cost of acquisition, loss cannot be set off: FM

Concessional corporate tax rate of 15 pc would be available for 1 more year till March 2024 for newly incorporated manufacturing companies: FM.

Concessional rate on capital goods and project imports to be phased out, says FM.

Any cess or surcharge on income not allowed as business expenditure: FM.

No set off of any loss will be allowed on undisclosed income detected during search and seizure operations, says FM.

Surcharge on long-term capital gains capped at 15 per cent: FM.

1 per cent TDS on transfer of virtual assets above a threshold, gifts to be taxed: FM.

No change in personal income tax rates in Budget

Belying expectations, Finance Minister Nirmala Sitharaman did not tinker with the personal income tax rates in the Budget for 2022-23.

The minister also did not raise standard deduction, which was widely anticipated in view of elevated inflation levels and impact of the pandemic on the middle class.

There was no change income tax slabs in the personal income tax category in the Budget unveiled on Tuesday.

The corporate tax rate too was kept at the same level. However, concessional rate of 15 per cent has been extended by one year for newly incorporated manufacturing units.

Govt pegs fiscal deficit for FY22 a tad higher at 6.9%

India's fiscal deficit will unexpectedly rise to 6.9 per cent of GDP in the current fiscal and it is being targeted to be cut to 6.4 per cent in the next financial year.

The fiscal deficit or the gap between expenditure and revenue was estimated at 6.8 per cent of the gross domestic product (GDP) in the current financial year ending March 31, 2022.

Total expenditure during the current year is estimated at Rs 39.45 lakh crore while total resources mobilisation would be Rs 22.84 lakh crore, Finance Minister Nirmala Sitharaman said while unveiling Budget 2022-23 in the Lok Sabha on Tuesday.

The government on Tuesday proposed to extend the customs duty exemption on steel scrap by one year.

The move has been taken to provide relief to the secondary steel producers in the MSME sector, Finance Minister Nirmala Sitharaman said while presenting the Union Budget for the financial year 2022-23 in Parliament.

"Customs duty exemption given to steel scrap last year is (being) extended for another year to provide relief to MSME secondary steel producer," she said.

She also announced a reduction in customs duty on cut and polished diamond, gemstones to 5 per cent.

Besides, she said that the government will introduce IT-driven reforms for special economic zones (SEZs) and concessional rates on capital goods, and project imports would be phased out.

Certain anti-dumping duties and countervailing duties on certain steel products are being revoked due to high prices, she noted.

"Unblended fuel to attract additional excise duty of Rs 2/litre from October 1 to promote blending biofuels in petrol and diesel," she said.

Import duty on cut and polished diamonds and gemstones will be reduced to 5 per cent while on sawn diamond to nil in order to boost the sector, Finance Minister Nirmala Sitharaman said on Tuesday.

At present, import duty on cut and polished diamonds as well as gemstones is 7.5 per cent.

Presenting the Budget for 2022-23 in the Lok Sabha, Sitharaman also announced that the government will facilitate export of jewellery through e-commerce for which it will implement a "simplified regulatory framework" by June this year.

"To give a boost to the gems and jewellery sector, the customs duty on cut an polished diamonds and gemstones is being reduced to 5 per cent. Simply sawn diamond would attract nil custom duty," the FM said.