Opposition had asked the government to take up only those bills that were not controversial in Parliament during the Budget Session. 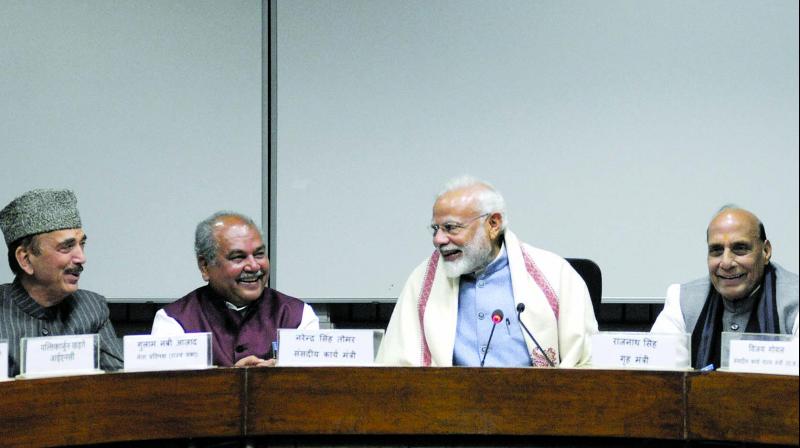 New Delhi: The Opposition parties have asked Prime Minister Narendra Modi to not present any controversial bills in Parliament during the Budget session. This was conveyed to the Prime Minister during an all party meeting held on Thursday, a day before the interim budget is presented before Parliament.

Quoting Prime Minister Narendra Modi, senior Congress leader Ghulam Nabi Azad said that the government has assured that it is going to present an interim budget on February 1.

Opposition had asked the government to take up only those bills that were not controversial in Parliament during the Budget Session.

“We should take up only those bills which are not controversial... on which there is total unanimity,” the leader of opposition in Rajya Sabha said.

Mr Azad said it would be difficult for Parliament to function if the government pushes for contentious bills.

During the all-party meeting, Trinamool Congress (TMC) leaders Sudip Bandyopadhyay and Derek O’Brien raised six issues. The TMC leaders said that once the President’s address and budget discussions got over, there would only be a few hours left for discussion. They said that the issue of jobs and famer distress should be discussed during that time.

They questioned why the government had listed as many as 48 bills to be discussed in just 240 minutes. “Why has Government listed 48 Bills in 240 minutes? Only 5 minutes per Bill!,” they said.

Echoing Mr Azad’s sentiments, the two leaders said that the government should refrain from presenting controversial bills. “Government will be responsible for disruptions if they list contentious Bills,” the TMC leaders said.

They also said that the TMC would raise the issue of misuse of the CBI. “CBI is being misused against political opponents. This will be raised strongly by us and other Opposition parties,” Mr O’Brien said.