The BJP had registered one of its best performance in Rajasthan under Raje’s leadership in 2013 when it won 163 of the total 200 Assembly seats. 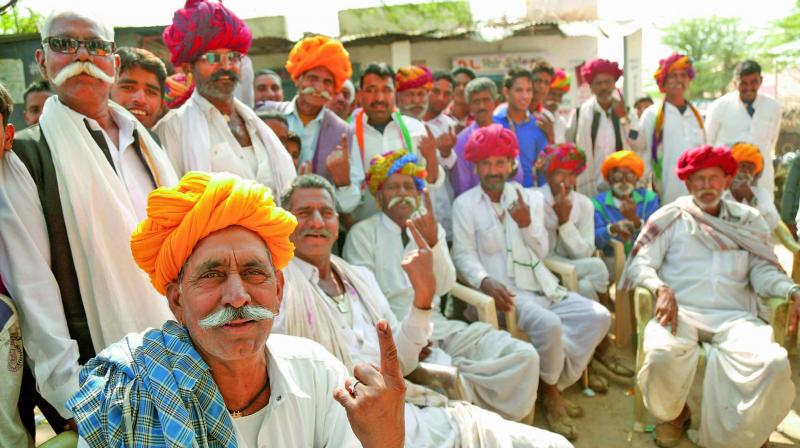 People show their fingers marked with ink after casting their vote during byelection for a parliamentary seat at a village near Ajmer. (Photo: PTI)

New Delhi: The announcement of results for the five January 29 bypolls in Rajasthan and West Bengal will coincide with Union Budget presentation on Thursday.

The outcome of the byelections to three Lok Sabha and two Assembly seats in the two states is being viewed as a crucial test for the ruling BJP in Rajasthan and the TMC in West Bengal.

The results will also indicate the electoral impact of Rajput protests against film Padmaavat and whether voters’ mood has changed since the Gujarat and Himachal Pradesh Assembly elections won by the BJP in November-December 2017.

In Rajasthan, where Assembly elections are scheduled by the end of this year, CM Vasundahra Raje, who has been facing tough challenge from the Opposition Congress, had campaigned aggressively in Ajmer and Alwar parliamentary constituencies and the Mandalgarh Assembly seat.

The BJP had registered one of its best performance in Rajasthan under Ms Raje’s leadership in 2013 when it won 163 of the total 200 Assembly seats. A year later, the BJP won all the 25 parliamentary seats in the state.

However, many feel that the state government is facing anti-incumbency and the Congress is in a resurgent mode.

The bypolls took place at a time when the state was facing a major stir by the powerful Rajput community over the release of Padmaavat with some Rajput organisations announcing that they will vote against the BJP.

In West Bengal, by-polls for Lok Sabha seat of Uluberia and Noapara Assembly constituency are also being viewed as a crucial test for the TMC and Opposition parties ahead of the 2018 panchayat polls.

The ruling TMC is confident of retaining Uluberia and wresting Noapara from the Congress. The BJP, which is desperately trying to gain ground in West Bengal, is confident of increasing its vote share in both the seats.