'I want to ask whether you have expunged the remarks. Have you gone through the records,' Omar Abdullah asked. 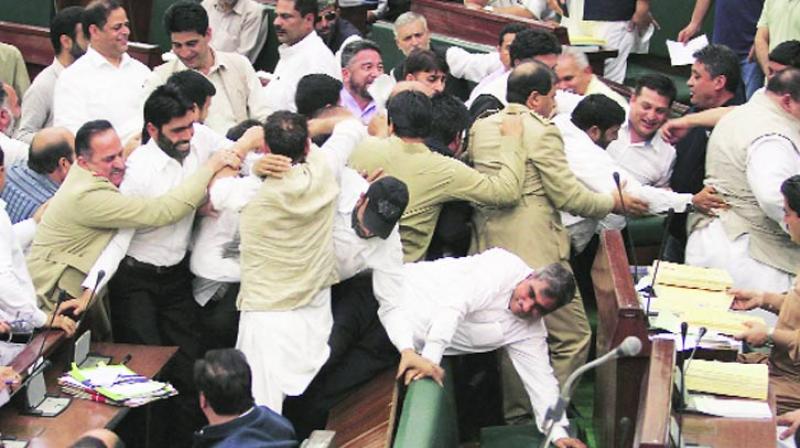 The Jammu and Kashmir Assembly was on Wednesday rocked by unprecedented violent protests. (Photo: PTI/Representational)

Jammu: The Jammu and Kashmir Assembly was on Wednesday rocked by unprecedented violent protests during which furniture was damaged and mikes were uprooted by opposition members who demanded that Chief Minister Mehbooba Mufti clarify her stand on her remarks on Article 370, forcing the Speaker to adjourn the House.

As the House assembled this morning, Leader of the Opposition Omar Abdullah sought clarification from Speaker Kavinder Gupta on whether he had checked the records of the proceedings connected with the Chief Minister's statement and expunged her remarks on Article 370.

"I want to ask whether you have expunged the remarks. Have you gone through the records," Omar asked.

On this, the National Conference and the Congress trooped into the Well of the House, raising slogans against the government and the Speaker, demanding that the Chief Minister make a statement on the floor of the House.

Some of the members were seen protesting on the tables and furniture and mikes were uprooted during the protests.

Chairs were thrown, papers were torn and thrown in the Well as anti-government, anti-BJP, anti-Speaker and anti-RSS slogans were raised.

Some of the members virtually came close to clashing with Lal Singh, a minister of the ruling coalition, however, the marshals and watch and ward staff prevented it.

During the violent protests, one watch and ward staff is reported to have been injured.

The Speaker adjourned the House for half an hour as it became difficult to continue the proceedings.

Speaking to the reporters outside the House, Congress Legislative Party leader Nawang Rigzin Jora said, "We had raised the issue of the chief minister's remarks and its clarification yesterday and the speaker had told us that we have expunged it but later retracted by saying it has not been expunged."

"The speaker is enacting a drama in the House. He should make up his mind whether he has expunged it or not. What does he want. Does he want to run the House smoothly," Jora said.