The officer, Manoj Kumar, has denied the charges saying the entire episode was being blown out of proportion. 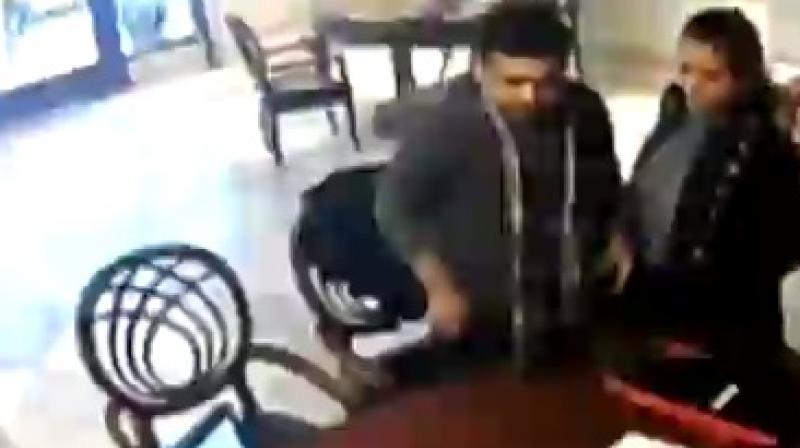 A video grab from the CCTV footage showing 'estranged wife of main accused Gautam Kundu and the investigating officer.

The officer, Manoj Kumar, has denied the charges saying the entire episode was being blown out of proportion and was part of a "larger conspiracy" to take him out of the case.

Officials said Kumar, an Assistant Director of the agency, has been "suspended pending enquiry" even as he has been removed from the cases he was probing like the Rose Valley chit fund case and some pertaining to the Coal blocks allocation.

Purported CCTV grabs of the IO and the woman were last night shown on some West Bengal-based news channels which claimed that the footage allegedly revealed that the duo travelled together by air from Kolkata to Delhi sometime back and later together checked into a hotel in the Sunder Nagar area of the national capital.

While speaking to reporters outside the agency's Salt Lake office in Kolkata, Kumar claimed innocence.

"It is a larger conspiracy to eject me out of the case (Rose Valley). I don't want to comment to be political victim or a victim of cross-fire by the Kolkata Police for the reasons best known to them. I have already offered my cases to be scrutinised by any officer of ED or to a team of officers," he said.

He, however, evaded direct replies to the queries on the videos purportedly showing him and the woman together as he claimed that he went to Delhi "on his own" to file attachment of assets cases before an appropriate authority and that the lady came "separate".

Taking cognisance of the late night reports yesterday, the Enforcement Directorate headquarters in Delhi sought a report from Kolkata and said "strict disciplinary action" will follow if charges are proved true.

The CCTV footage of the duo allegedly being together was obtained by the Kolkata Police as part of its separate investigation against the activities of certain hawala dealers post demonetisation.

"This is a serious case and we are investigating it thoroughly. There were some inputs about the official concerned and he was under watch. A probe report will decide the future course of action," an agency source said.

However, they added it does not look like that the high- profile probes could have been influenced by the IO as such cases are supervised at multiple levels.

Kumar said he was instrumental in getting successes in the Rose Valley ponzi case, pegged at Rs 15,000 crore.

The woman was having an estranged relationship with Gautam Kundu and they were living separately since October 2013, Kumar said, adding several disputes are going among them, before the PMLA case of Rose Valley was taken up by the ED.

"I had been a great help to the investigation (in Rose Valley) and with this I was able to attach assets worth Rs 1,600 crore. The investigations done by me in these cases was also appreciated by PMLA courts as well as the high court. The ED is about to attach several more properties of Rose Valley as well as various persons for which legal formalities are under process," he told reporters.

The officer joined ED on deputation few years back from the Customs and Central Excise department.