Nazeer Ahamed further stated that his family is appalled at the way they were kept on the sidelines at such a critical juncture. 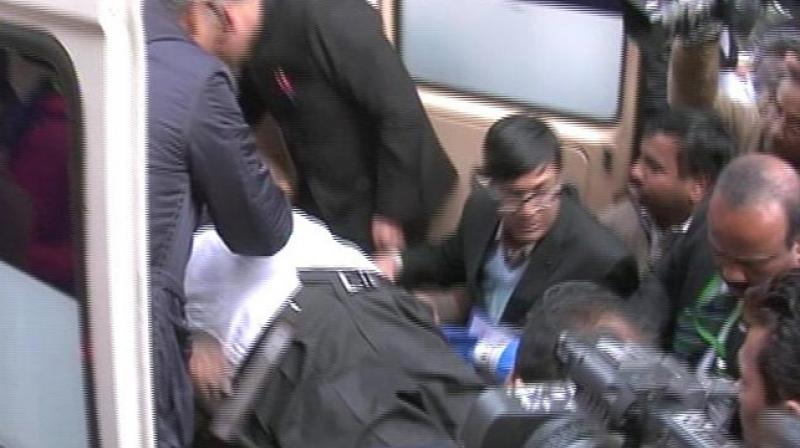 Ahamed had served as Minister of State for External Affairs in the previous UPA government. (Photo: Video grab)

New Delhi: The family of former union minister E Ahamed, who passed away in the wee hours of Wednesday morning after suffering a cardiac arrest in the Parliament on Tuesday, lashed out at the administration of the Ram Manohar Lohia (RML) hospital in Delhi where he was admitted, saying that they were neither allowed to meet Ahamed nor consulted regarding his medical procedures.

Speaking to ANI in Delhi, Nazeer Ahamed, son of the deceased said that he and his other family members were barred from meeting his father and were not kept in loop in regard to any medical developments.

Nazeer Ahamed further stated that his family is appalled at the way they were kept on the sidelines at such a critical juncture.

"If they are doing any new treatment, there is nothing being discussed with us. I think the decision seems to be made by the junior doctors on call, instead of at least consulting with the family. That has not happened even once," he added, before his father passed away.

The senior politician's daughter, who was also keeping vigil in the premises of RML, expressed her shock and dismay at the "unprofessional" and "unethical" behaviour by the hospital administration.

Nazeer's brother-in-law Babu Shehzad, who is a nephrologist, asserted that the hospital had no protocol for visitors, which was disturbing and stressed on how the family had begged and pleaded with the administration to visit Ahamed, but to no avail.

"This is our basic right and we were not allowed. When I asked to see the protocol for visitors there was no such thing. They wanted to do the ECMO procedures so that he can be sustained on artificial means, and that was not even discussed with the family. How can they do it? It's assault," he stated.

Congress General Secretary in charge of Uttar Pradesh Ghulam Nabi Azad was also part of the visiting delegation at the RML hospital here.

78-year-old Ahamed fell unconscious soon after he took a seat in the rear rows of the Central Hall of Parliament during President Pranab Mukherjee's speech to open the Budget session.

At around 2.15 pm, he was shifted to the RML trauma centre's ICU where he was put on ventilator. However, he passed away in the wee hours on Wednesday.

Prime Minister Narendra Modi had also inquired about his health.

Ahamed had served as Minister of State for External Affairs in the previous UPA government.