In view of the prevailing situation, all mobile data services have been blocked in the state since midnight. 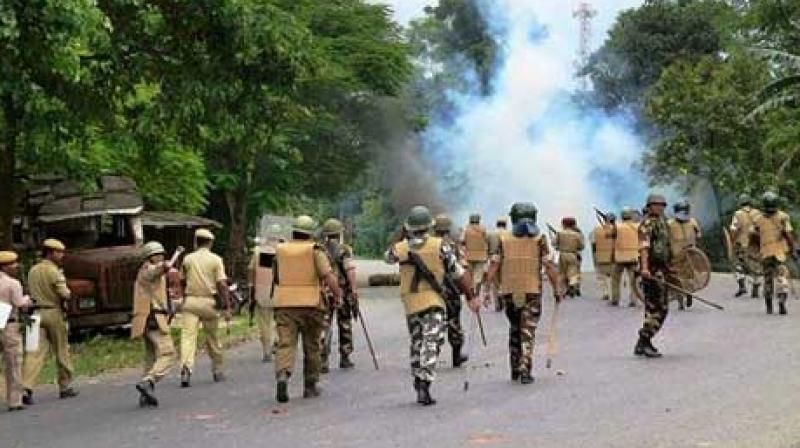 Two persons were killed while several others suffered injured in clashes between the police and a mob in Dimapur and Longleng districts of Nagaland. (Photo: PTI/Representational)

Kohima: Two persons were killed while several others suffered injured in clashes between the police and a mob as groups of people rampaged government properties since last night in Dimapur and Longleng districts, even as polling to some Urban Local Bodies (ULB) in Nagaland were held on Wednesday.

In view of the prevailing situation, all mobile data services have been blocked in the state since midnight, while some tribal bodies that were opposed to the holding of the elections called for a bandh in the districts.

In Dimapur, two youths died and at least three were injured as a crowd gathered near the private residence of Chief Minister T R Zeliang at 3rd Mile and a police force tried to stop them around 9.30 PM, a state official said.

There were reports of the deaths caused by police firing but not confirmed by the official who did not want to be named.

In Longleng, the interior district of the state, seven people were injured after police resorted to firing in order to prevent a mob from entering the office of the DC Longleng, the official said.

The mob also damaged polling materials of all the 11 polling stations as tension continued to prevail in both the district even as the administration has imposed 144 CrPC.

Cops also fired in air in Dimapur, where people had gathered protesting the government's decision, the official said.

In view of the prevailing situation, all mobile data services have been blocked in the state since last midnight and will continue till the situation was brought under control, official sources said.

Meanwhile, different tribal organisations were observing bandh in some districts of Nagaland to boycott the elections by not allowing the voters to exercise their franchise during Wednesday's polling in for the 12 councils.

The bandh has been called so that people cannot participate in the polling to be held from 7 am to 3:30 pm.

In Kohima, Angami Youth Organisation (AYO) Neinguvotuo Krose said they are calling a bandh from 8 am to 3 pm as the government wanted to fool the people with its "divide and rule" policy.

He said restrictions would be imposed on functioning of government offices and movement of people's representatives like MLAs and other politicians.

All private activities, hospitals, business, educational institutions and pedestrians are exempted from the purview of the bandh, Krose said.

In Phek district, Chakhesang Youth Front called the bandh in Chakhesang region for 12 hours from 6 AM, while various organisations have called for a 6 AM to 6 PM shutdown in Tuensang.

Chakhroma public organisation said it has called the bandh from 6 AM to 5 PM in the area from Piphema to Assam-Nagaland border on the National Highway and all adjoining routes.

These organisations have been opposing the state government's decision to hold the ULB elections with 33 per cent women reservation, stating that it "infringes" on the special rights for Nagaland guaranteed by Article 371(A) of the Constitution.