India   All India  01 Feb 2017  Modi to visit Russia in June, will be Guest of Honour at St Petersburg Int'l economic forum
India, All India

Modi to visit Russia in June, will be Guest of Honour at St Petersburg Int'l economic forum

Observers point out the visit will provide India a chance to convey its concerns on Moscow inching closer to both Beijing and Islamabad. 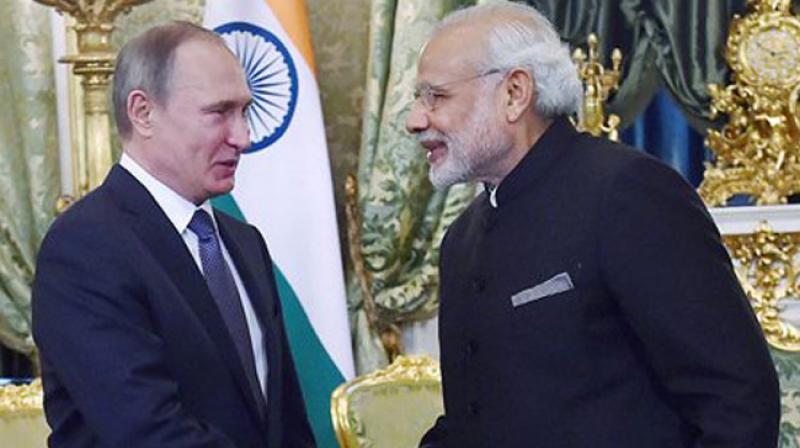 New Delhi: Prime Minister Narendra Modi will visit Russia this year in the beginning of June, the Ministry of External Affairs (MEA) announced on Wednesday.

Observers point out that the three-day visit from June 1 to 3 will provide India an opportunity at the highest levels to convey to Russian President Vladimir Putin, New Delhi’s concerns on Moscow inching closer to both Beijing and Islamabad despite the decades-long strategic partnership and close friendship that New Delhi and Moscow have shared.

In a statement, the MEA said, “This is to confirm that India has been invited as a Guest Country at the St. Petersburg International Economic Forum that will be held in the city of St. Petersburg, Russia from June 1 to 3, 2017. As a part of this, Prime Minister Narendra Modi will attend the Forum as Guest of Honour. Other details of the Prime Minister’s visit are being worked out, and we will announce them as and when they are finalised".

On Doval’s just-concluded visit, the MEA said, “National Security Adviser Ajit Doval paid an official visit to Russia from January 30-31, 2017 at the invitation of Mr. Nikolai Patrushev, Secretary of the Security Council of Russia.”

“The talks were part of regular high level consultations between India and Russia. The two sides discussed issues of mutual bilateral, regional and global interest, with a special focus on security and defence cooperation between both sides,” the MEA said.

“They noted with satisfaction the ongoing cooperation between them in meeting threats to their national security, particularly those emanating from terrorism in their respective regions, and unequivocally reaffirmed their intention to continue to work together to confront these challenges,”  it added.

“The NSA and the Secretary of the Russian Security Council noted that the Special and Privileged Strategic Partnership between India and Russia was a great asset for both the peoples, and a factor of peace and stability in the region and the world. They agreed to further strengthen this partnership in all areas. The two sides also highly evaluated the plans to celebrate the 70th anniversary of establishment of diplomatic relations between India and Russia in 2017, and pledged to make 2017 a special year in the history of their relations,” the external affairs ministry said.