Police said 10 people were injuried in the explosion that is suspected to be an 'act of terrorism' and comes ahead of the Feb 4 polls. 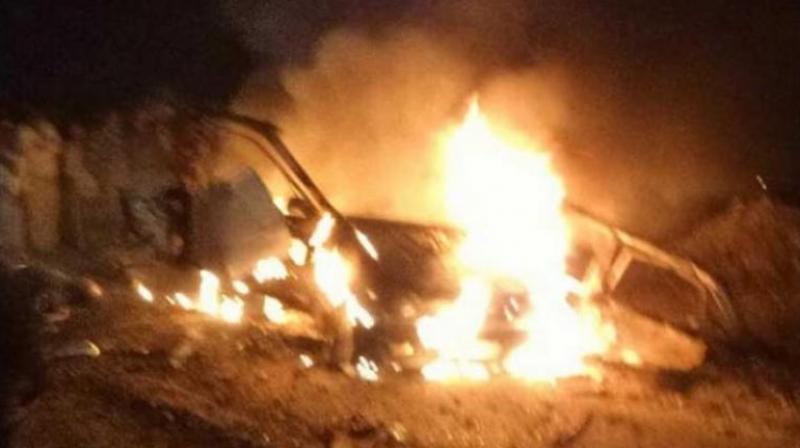 An explosion occurred on Tuesday near the venue of the poll campaign of Congress candidate Harminder Singh Jassi at Maur Mandi. (Photo: Twitter)

Bathinda: Two children injured in the explosion in a car at Maur Mandi in the district succumbed to injuries, taking the death toll to five, even as a forensic team reached the blast site on Wednesday to probe the incident.

Three persons were killed on Tuesday in the explosion near the venue of the poll campaign of Congress candidate Harminder Singh Jassi at Maur Mandi.

Police said ten people had sustained injuries in the explosion, which is suspected to be an "act of terrorism" and comes ahead of the February 4 polls.

"Two children identified as Ripandeep and Japanpreet in the age group of 14-15 succumbed to burn injuries sustained in the car explosion," a police official posted in Bathinda said today.

Three passers-by who were killed in the blast have been identified as Harpal Singh (55), Barkha (7) and Ashok (35), police said.

The blast had occurred around 8:30 pm last night shortly after the "jan sabha" of Congress candidate Jassi, who is contesting from Maur Assembly seat.

Jassi, who is a relative of Sirsa-based Dera Sacha Sauda head Gurmeet Ram Rahim Singh, escaped unhurt in the incident.

As per reliminary probe, the blast had occurred in a car which was found to be stolen and was bearing the registration number of a two-wheeler. The chassis and engine number of the vehicle was also removed, police officials said.

The blast was so powerful that it ripped apart the vehicle. Initially, it was suspected that the blast was caused by a LPG cylinder in the car. But later it was found that the car was not running on gas. A burnt pressure cooker was also found near the blast site.

A forensic team of police, based at Chandigarh, has reached Bathinda to investigate the cause of the blast.

On Tuesday, the Punjab DGP had said, "After initial spot inspection, an act of terrorism cannot be rule out. But only experts can establish the cause of the blast."

Jassi's driver, Vikram, yesterday had said, "The explosion occurred when we were leaving the venue of the road show. Our vehicle has also been damaged." He had said Jassi "is safe but in shock".