Kishor's jibe at Sushil Modi was prompted by a couple of tweets of the latter on the previous day. 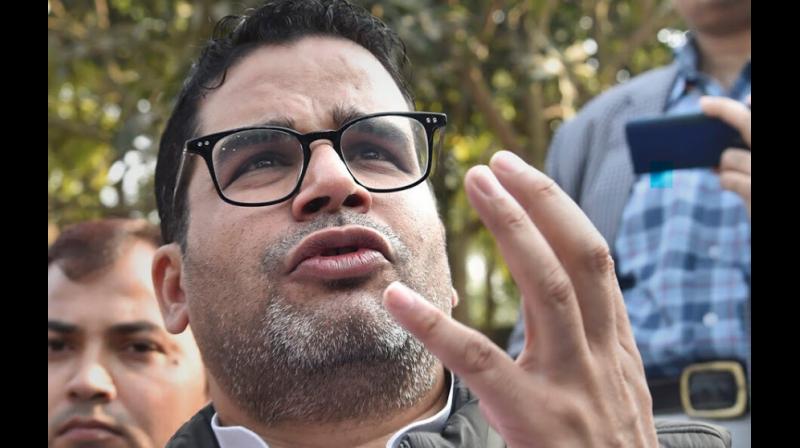 Kishor expressed bemusement on Twitter at the 'vyakhyan' (discourse) from Sushil Modi on coalition dharma, and made a close-to-the-bone remark about 'circumstances' that helped the veteran BJP leader return as deputy in 2017, despite his party having lost the assembly polls two years before. (Photo: PTI)

Patna: Gloves were off on Tuesday between the Bihar BJP and Prashant Kishor, vice-president of Chief Minister Nitish Kumar's JD(U), whose outspokenness on contentious issues like the Citizenship Amendment Bill (CAA), NRC and sharing of seats in the assembly polls next year, has left a large section of his party flummoxed and the ally rankled.

After raising the BJP's hackles last month by opposing the Citizenship Amendment Bill, which the JD(U) supported in Parliament, and triggering a storm two days ago with the contention that the CM's party must contest more seats than its ally, Kishor intensified the political heat with a frontal attack on Deputy Chief Minister Sushil Kumar Modi.

Kishor expressed bemusement on Twitter at the 'vyakhyan' (discourse) from Sushil Modi on coalition dharma, and made a close-to-the-bone remark about 'circumstances' that helped the veteran BJP leader return as deputy in 2017, despite his party having lost the assembly polls two years before.

His jibe at Sushil Modi was prompted by a couple of tweets of the latter on the previous day wherein the wily BJP leader had refrained from mentioning the JD(U) vice president by name, but made snide remarks about his 'business interests' trumping his political commitment and benefiting the opposition.

The deputy CM, arguably the most prolific Twitter user among top politicians of Bihar, chose not to join issue with the 1977-born Kishor, and sources close to him said he was away in Chennai to enjoy New Year celebrations with family.

However, the faction-ridden state BJP rose in unison against Kishor who shot to fame after handling Narendra Modi's election campaign in 2014.

Mounting attacks on Kishor, whose company IPAC has among its clients BJP baiters like Mamata Banerjee, Arvind Kejriwal and Chandrababu Naidu, leaders of the saffron party sought to remind the election strategist-turned-politician that it was Sushil Modi's sustained campaign highlighting Lalu Prasad's complicity in the fodder scam that paved the way for the ouster of the mighty RJD from power.

Those lambasting the JD(U) vice-president included, expectedly, Sushil Modi's loyalists like ministers Suresh Sharma and Pramod Kumar as also MLC Nawal Kishore Yadav and MLA Nitin Nabin neither of whom is perceived to be a part of the Deputy CM's camp.

In contrast, leaders of the JD(U) seemed baffled at the utterances of its national vice-president, who was inducted into the party only a year ago and elevated to the top post within a few weeks, and treated the matter as a hot potato.

The chief minister, on his part, evaded queries from journalists when they approached him to know his stand on the issue here in the morning, muttering "sab theek hai" (all is well) while hurrying past them.

Kumar was visibly embarrassed to have faced the questions at a function organised to mark the death anniversary of late BJP veteran Nabin Kumar Sinha, where many state ministers, MPs and legislators belonging to the saffron party were also present.

Neeraj Kumar, JD(U) MLC and the state's minister for information and public relations, never known to be at a loss for words in his previous role as party spokesman, got flustered when asked to comment on the latest imbroglio and snapped "hamaare adhikar kshetra se bahar ki baat hai" (the matter falls outside my jurisdiction).

Another state minister Shyam Rajak, who is also a JD(U) national general secretary and its deputy leader in the assembly, tried to wriggle out with the remark, "nobody should utter anything that hurts anybody's feelings".

On Monday, the party's national general secretary (organisation) RCP Singh a confidant of the chief minister had criticised Kishor for his "untimely" utterances on sharing of seats in assembly polls.

JD(U) sources said on condition of anonymity that Singh's public criticism of Kishor for opposing CAB when the party had voted in its favour in Parliament, followed by the latter's meeting with the CM and his claim that Kumar has asked him "not to worry about what anybody else says in the party", has left the rank and file confused as to what was the official line.