General Rawat has been appointed as the first CDS of the country. 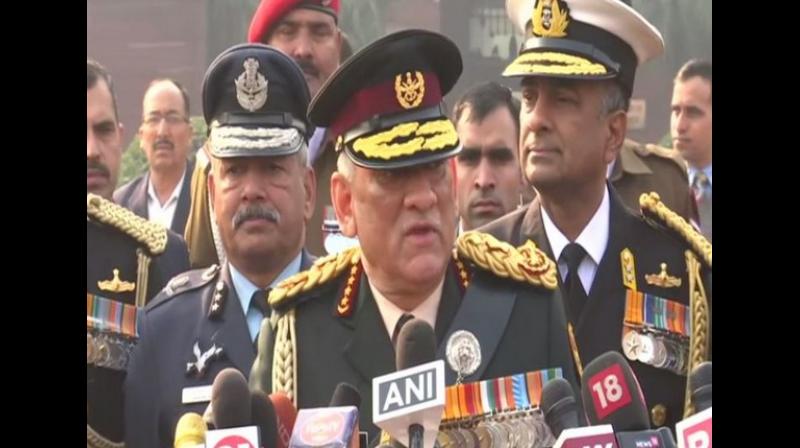 'As per the task given to the chief of defence staff we have to enhance integration and do better resource management. We have to achieve more synergy and integration. This is the motive,' the CDS said. (Photo: ANI)

New Delhi: Chief of the Defence Staff (CDS) will bring in synergy, enhance integration among the three services, and do better resource management, said General Bipin Rawat on Wednesday.

General Rawat has been appointed as the first CDS of the country.

Speaking to reporters here, he said that the CDS office will work to enhance capabilities of the three forces while working as a team.

"As per the task given to the chief of defence staff we have to enhance integration and do better resource management. We have to achieve more synergy and integration. This is the motive," the CDS said.

Further explaining details of the CDS' role, General Rawat said: "All the three services will work as a team. The CDS will control them but the work will be done through teamwork. The CDS will not be running any force as per its instructions."

"We will see how we can integrate our systems so that services can work in a coordinated manner," he said.

"Chief of the Defence Staff is all about synergy where effort is to achieve more than the sum of the whole. Sum of synergistic application of three services is not for 1+1+1=3 but sum to be five or seven," the Army's Twitter handle quoted him as saying.

General Rawat said that the CDS will remain neutral. "Neutral within the service and towards the three services," he clarified.

He demitted the office of Chief of Army Staff (COAS) on Tuesday.