Women under the draft law can seek subsistence allowance and can claim custody of minor children. 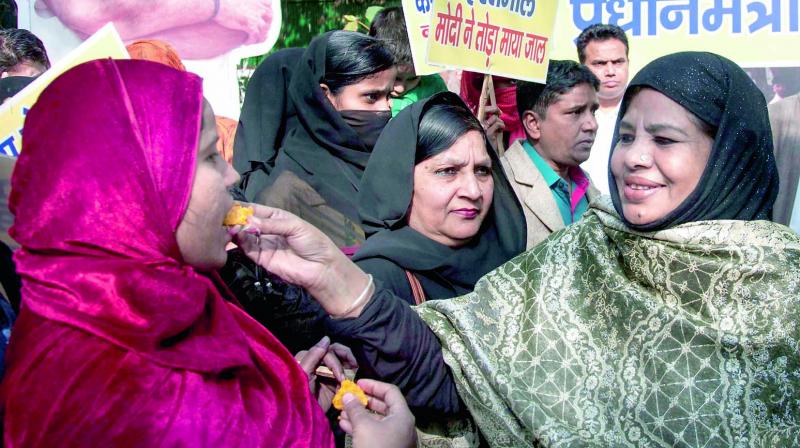 Muslim women offer sweets to each other at a programme to celebrate the passage of the triple talaq bill by the Lok Sabha in New Delhi. (Photo: PTI)

He also said that the policy of allowing Muslim women to perform Haj only in the company of a male guardian was "injustice" and discriminatory and his government has removed the restriction. Following this, hundreds of have applied to travel alone for the pilgrimage.

While delivering the inaugural address at the 85th Sivagiri Pilgrimage celebrations in Kerela via video conference, Mr Modi said, Muslim women have finally found a way out to "free" themselves from the practice after "years of hardship".  He mentioned the Haj issue during his monthly radio programme, 'Mann ki baat'.

"The hardship faced by Muslim mothers and sisters over triple talaq is not hidden from anyone. After years of struggle, they have found a way of freeing themselves from (the practice) of instant triple talaq," he said without referring to the Muslim Women Protection of Rights on Marriage Bill passed by Parliament's lower house.

The bill, which is to be taken up in Rajya Saha next week, makes instant triple talaq or 'talaq-e-biddat' illegal and provides for a jail term of up to three years for the husband.

Referring to the issue of Haj pilgrimage by women. Mr Modi said removal of the restriction of having a male guardian or 'mehram' may appear as a "small thing", but such issues "have a far-reaching impact on our image as a society".

"Why this discrimination? And when I went into the depth of the matter I was surprised to find that even after 70 years of our Independence, we have such restriction. For decades, injustice was being rendered to Muslim women but there was no discussion on it," he said in his broadcast.

"I am happy to note that this time about 1,300 Muslim women have applied to perform Haj without 'mehram' and women  from Kerala to north India, have expressed their wish to go for pilgrimage," he said.

"Usually there is a lottery system for selection of Haj pilgrims but I would like that single women pilgrims should be excluded from this lottery system and they should be given a chance at a special category," he said.

Soon after Mr Modi's address ended, minority affairs minister Mukhtar Abbas Naqvi tweeted that women seeking to travel alone for Haj will be kept out of lottery system and the 1,300, who have applied under the new rules, will be allowed to go for the pilgrimage.