Till now, women pilgrims were required to be accompanied by their husbands or Mehrams during the annual pilgrimage. 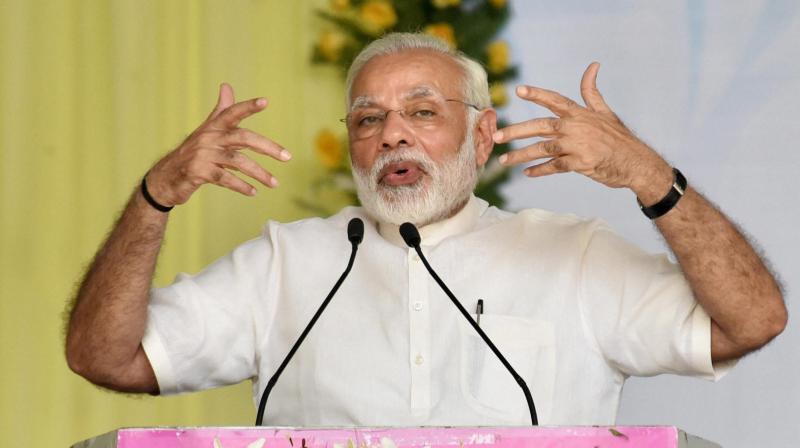 New Delhi: In his last address to the nation in 2017, Prime Minister Narendra Modi on Sunday sought to reiterate his government’s support for Muslim women while reiterating that his government is for the young and the underprivileged who are benefiting from his “Sabka Saath, Sabka Vikas” moto of this government.

The Prime Minister said that the mantra in the New Year should be “reform, perform, transform” to ensure development for all as the young voters join nation building.

The decision to do away with a lottery is going to benefit about 1,300 Muslim women, virtually guaranteeing their participation in the annual pilgrimage.

The term Mehram refers to a man, a woman cannot marry in her life — father, brother or son.

The decision to allow women pilgrims over the age of 45 to undertake the pilgrimage in groups, of at least four, sans Mehram is not new but the confirmed participation announced by Mr Modi on Sunday is the latest bonanza for them.

Till now, women pilgrims were required to be accompanied by their husbands or Mehrams during the annual pilgrimage. The pilgrims were shortlisted every year through a computerised lottery system.

Soon after Mr Modi’s address, minority affairs minister     Mukhtar Abbas Naqvi tweeted: “After PM Shri Narendra Modi Ji’s suggestion, I assure that those, about 1,300 women, who have applied to go for Haj without Mehram, will be exempted from the lottery system and allowed to proceed on Haj.”

Mr Modi also urged youths, who turn 18 on the first day of 2018, to register as electors and said that their votes will prove to e the bedrock of a “New India”. He also urged people to work  towards all-round development of the nation as his government pushes for reforms

In his radio programme, Mr Modi urged people to work towards all-round development of the nation in 2018 as his government pushes for reforms measures to tackle black money, corruption, benami properties and the evils of casteism and terrorism.

He said that the mantra for the New Year should be “reform, perform, transform” and called for “Sabka Saath, Sabka Vikas” (together with all development for all).

The Prime Minister also suggested that a “mock Parliament” be organised around August 15 in Delhi, comprising a young representative selected from every district, to deliberate on how a new India can be formed in the next five years.

Mr Modi said in the New Year, people should take concrete steps to make a “progressive India” and also recounted an inspirational story of Anjum Bashir Khan Khattak, the topper of the Kashmir Administrative Service examination.

“He actually extricated himself from the sting of terrorism and hatred and topped in the Kashmir administrative examination. You will be surprised to know that terrorists had set his ancestral home on fire in 1990,” Mr Modi said.

The Prime Minister also recalled his meeting with young girls from the state and said that he was amazed at the spirit that they had, the enthusiasm that was there in their hearts and the dreams they nurtured. He said people born in the year 2000 or later would gradually begin to become eligible voters from January 1, 2018.

On cleanliness, Mr Modi said that a change can now be seen in the form of public participation in rural and urban areas alike.

He said that the Cleanliness Survey 2018, the largest in the world, will be conducted from January 4 to March 10 to evaluate the achievements of the mission in urban areas. This survey will cover 40 crore people in over 4,000 cities.

He said during the Republic Day celebrations not one but 10 chief guests will grace the parade on Rajpath.