'God willing, when this message reaches you, I will already be a guest of my Lord in his heaven,' said the attacker in video. 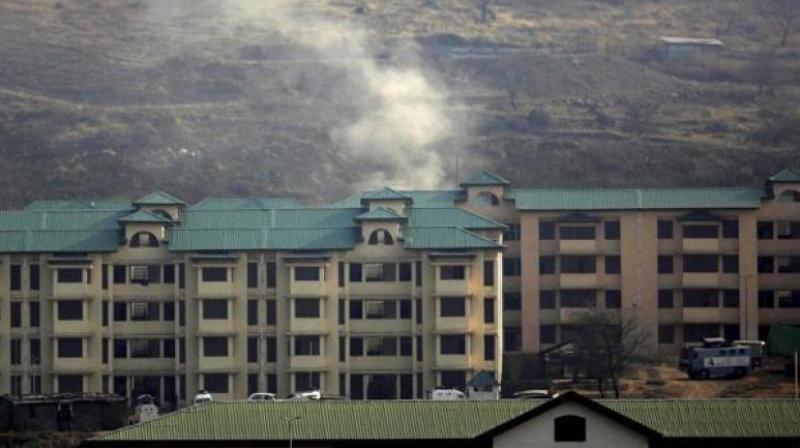 Officers said this is first time that a fidayeen or suicide attacker has recorded a provocative message like this before carrying out an attack. (Photo: PTI)

Srinagar: The body of the third terrorist who was held up at the Central Reserve Police Force (CRPF) camp at Lethpora in Jammu and Kashmir's Pulwama district was recovered during the flush out operation on Monday.

In a pre-dawn attack on Sunday, two terrorists and five CRPF personnel died after heavily armed Pakistan based terror group Jaish-e- Mohammed (JeM) carried out a suicide attack on the camp of the paramilitary force.

It was for the first time local terrorists carried out a suicide attack.

Among the terrorists -- Manzoor Ahmad Baba from Drubgam (Pulwama) and Fardeen Ahmad Khanday from Nazeempora (Tral) -- killed in the attack Khanday was the son of a serving police officer and had joined the JeM a few months ago.

According to NDTV, before the attack 16-year-old Khanday recorded a video message in which he talked about the plan to attack the paramilitary camp. The video is now viral and is being shared on WhatsApp and social media.

"God willing, when this message reaches you, I will already be a guest of my Lord in his heaven," he said at the beginning of the eight-minute video, in which he urged other young people to join the JeM.

Officers said this is first time that a fidayeen or suicide attacker has recorded a provocative message like this before carrying out an attack.

Security forces are analysing the video. "Yes it's a cause for serious concern. At a time when we are trying to bring back local youth to the mainstream and many have already given up militancy and are returning to their families, this is certainly not a good sign," NDTV quoted a senior police officer.

On Sunday at around 2 am, terrorists armed with under-barrel grenade launchers and automatic weapons forced way into the CRPF camp, triggering a fierce exchange of fire as hundreds of soldiers and special counterinsurgency police surrounded the area.

While four CRPF soldiers died in the gun fight, one died of heart attack during the initial assault, the police said. It was unclear how many personnel were inside the camp during the attack, which came just days after forces killed a top leader of the JeM in a shootout not far from the camp. Three paramilitary troopers were wounded.

Terming the attack "unfortunate", Jammu and Kashmir's Director General of Police SP Vaid said security forces had input about an imminent militant strike in the Kashmir Valley for the past three days. He said as long as Pakistan keeps sending militants, security forces and people of Kashmir will continue to go through this.

According to reports, security forces bombed the top floor of the building on Monday where a terrorist is believed to be holed up. The bodies of the other two terrorists were recovered on Sunday and were identified.

The CRPF camp also serves as training centre for troops inducted for counter-militancy operations in the Kashmir Valley.

A Jammu and Kashmir Police team is also co-located with CRPF in this camp.