India   All India  01 Jan 2017  From 'Mitron' to 'Saathiyon': Twitter wonders why Modi changed his salutation
India, All India

From 'Mitron' to 'Saathiyon': Twitter wonders why Modi changed his salutation

The prime minister’s go-to salutation was mysteriously missing in his speech on New Year and Twitter went crazy. 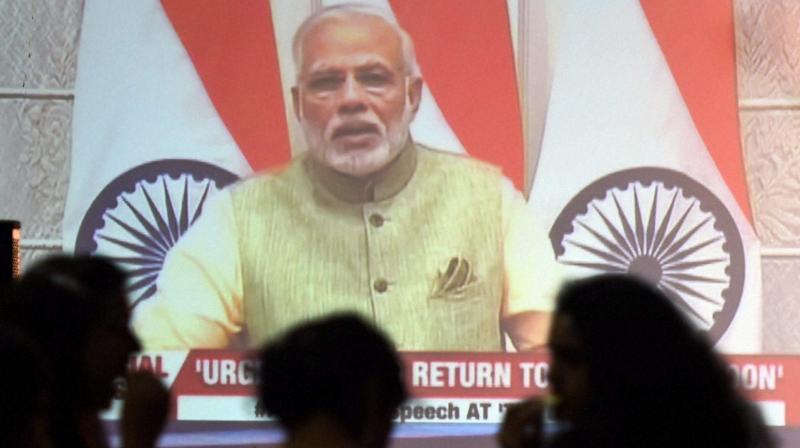 New Delhi: In a speech awaited by the entire nation with bated breath on New Year's eve, Prime Minister Narendra Modi introduced a slew of new incentives. He also spoke about how ordinary citizens took one for the team, as they coped with demonetisation with resilience.

However, what he didn’t say was ‘Mitron’, his now trademark style of addressing his fellow citizens. The prime minister’s speeches have been sufficiently peppered with the term frequently in the past; and the absence of it set the Twitter mills running on Saturday.

Instead of ‘mitron’, Modi had used sathiyon, dosto (friends), and deshvashiyon and trust the Twitterati to bring out the party hats.

Didn't use "Mitron" even once?
MODI HAS UNFRIENDED THE NATION.

Modi must be the first man to Friendzone an entire country. #Mitron

In fact, the word had garnered a lot of buzz right from the announcement of the speech with many trying to cash in. Pubs in cities had offered discounted alcohol whenever Modi said ‘Mitron’. Recharges were offered by a mobile payment company on similar grounds.

Get a beer or a shot for Rs. 31* every time you hear our Prime Minister say '#Mitron' during his speech tomorrow.https://t.co/ikTZ9TyEgL pic.twitter.com/qf8l8ymXSU

While people who were looking to exploit these offers were disappointed, Twitter sure managed to have a hearty laugh.

Modi to all those who were planning on taking a shot everytime he said Mitron: "LOL"

10 mins in, No #Mitron yet from @narendramodi. People at social aren't getting drunk tonight

Pity the guys who had to redo the speech thingy because of all this. Hope that word is killed forever https://t.co/SOIWjg3pBw