The top court in a unanimous verdict on Saturday cleared the way for the construction of a Ram Temple at the disputed site at Ayodhya. 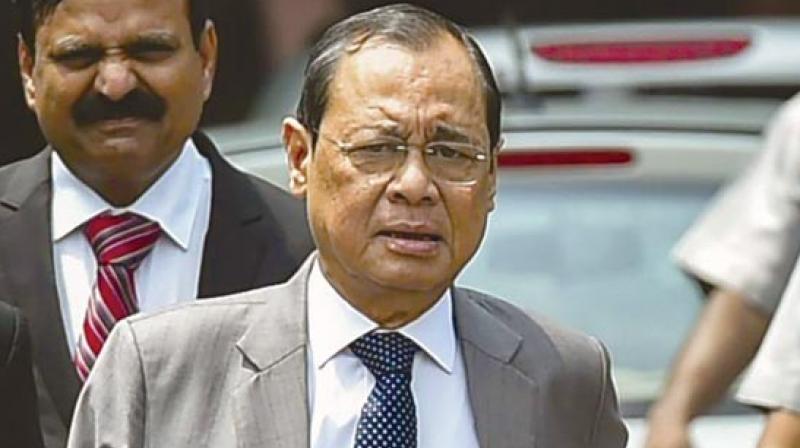 Justice Gogoi, however, declined to comment on the verdict at the programme. (Photo: File)

Guwahati: Senior Supreme Court judges have heaped praise on Chief Justice Ranjan Gogoi over the Ayodhya case verdict on Saturday. At a book launch event here on Sunday, Chief Justice- Designate S A Bobde said Justice Gogoi's "grit, mettle and character" are so strong that it is difficult to get anything wrong passed.

Justice Gogoi, however, declined to comment on the verdict at the programme. "I do not wish to get into any contentious issue. This is not the occasion," he said.

The top court in a unanimous verdict on Saturday cleared the way for the construction of a Ram Temple at the disputed site at Ayodhya, and directed the Centre to allot a 5-acre plot to the Sunni Waqf Board for building a mosque. "I consider myself to be privileged to have worked with Justice Gogoi, whose grit, mettle and character are so strong that it is difficult to get anything wrong passed," Justice Bobde said.

Justice Gogoi's sense of justice by taking along everybody is so strong that he does not do anything unless all concerned give consent, he added.

"Democracy is designed for welfare of all citizens and an independent judiciary is one of the instruments to be used for that purpose.

"Today, we gather to acknowledge and celebrate the legacy and achievement of that instrument," Justice Bobde said during release of the Assamese version of the ''Courts of India: Past to Present'', published by the Supreme Court.

Another senior judge, Justice Arun Mishra, said Justice Gogoi decided the "most important indecision" that the country was facing. "He has achieved impossible with the 1,000-page judgement within two-three weeks. This is rather the most impossible task achieved by his regime. He shows not determination to decide that case, but what the Supreme Court has capability of doing and what it can achieve. You made a name in history," he said.

The judiciary is going through a critical phase, where people want to control everything but Justice Gogoi has provided the insulation, courage and quality through his decisions, Justice Mishra said. "I see when Justice Gogoi is retiring in few days, he was demitting the office in most difficult times. Justice Bobde's task to take over is not easy," the fourth senior-most judge of the top court said.

Justice Gogoi is due to retire on November 17. "Justice Gogoi has made this country indebted with his decisions and will be remembered for his courage and determination in delivering the verdicts," Justice Mishra said.

Justice Shripathi Ravindra Bhat said, "Yesterday, we saw one history, which I am sure when all the dust has settled, will remain indelible in Indian judicial history that the courts spoke in one word."

It was a turning point in the history that the court stood because when the courts speaks, it speaks for the Constitution, he said.

"It has never happened. It has happened but once in the past in the US. That was a very defining moment when did away with separate but equal. That was the unanimous verdict like yesterday," Justice Bhat added.