Strictly putting any ideas of a romance off the table, co-stars Megha and Ashish of Khwaabon Ki Zamin Par sit down for a fun chat. 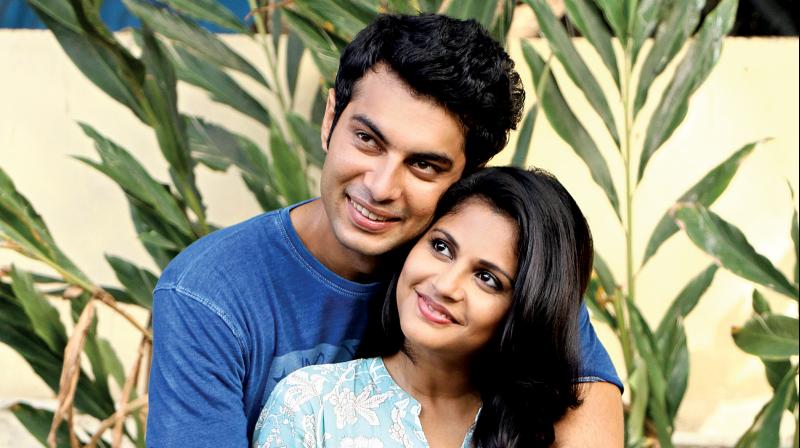 Megha Chakraborty says that it was her talkative nature that helped break the ice with her Khwaabon Ki Zamin Par co-star, Ashish Kadian. Being the quieter one, it helped that Ashish is a  good listener. After months of working together, the duo now gets along like a house on fire, with a fabulous chemistry to show for it. We talk to the pair about their on-screen adorableness. Edited excerpts:

You first met in a flight, and Megha troubled you. Right?
Megha: I didn’t trouble him much, but he was bugged with my endless talks. I still remember the day clearly; we were travelling to Lucknow for a shoot. During the entire duration, he was quiet and I was the one talking away. Poor guy, he must be wanting me to shut my mouth! [Laughs]
Ashish: Yes, Megha started talking to me first, and she just wouldn’t stop. I was irritated initially, but later I got used to her banter. I’m a good listener hence we could bond well.

Given the high expectations from your show, were you nervous when it went on air?
Megha: Actually, this isn’t my first show. I’ve done Badi Devrani, and a couple of Bengali ones. But, of course, I was very nervous and excited when it went on air.
Ashish: To be honest, I wasn’t nervous. It was kind of emotional for me.

Megha, how was it to work with an introverted co-star?
Megha: It’s actually fun. I keep talking, and Ashish keeps listening, which is nice. But I think I’ve made him a little extroverted.
Ashish: Yes, I keep listening to her, but now I’m gradually opening up and taking efforts to talk more. [Smiles]

You guys are apparently painting the town red post shoots…
Megha: We do hang out a lot after shoots. I love partying and going for long drives. We have a cool group, but Ashish is reluctant about going for parties. So I always have to push him to join us.
Ashish: We hang out with our co-stars and enjoy a lot whenever we get time off from shoots.

One tends to get attracted to people they spend time with. Do you guys feel the same?
Megha: Nothing of the sort; we’re very good buddies. No attraction has happened, yet.
Ashish: We’re good friends. Nothing more.

Considering Ashish is way taller, romancing him must be quite the task, Megha?
Megha: Yes, it was kind of tough initially. I felt like I was hugging my dad in some scenes, because of his height!
Ashish: It wasn’t an issue for me, but I found romancing an issue, since I didn’t know how to. I kept giving blank expressions, but now I’m okay with the scenes.

Your chemistry is being appreciated. You must be relieved.
Megha: I’m glad it’s being liked and appreciated. I would say our off-screen friendship and bonding helped us emote better on-screen.
Ashish: It’s quite encouraging to know viewers like our chemistry. Yes, our friendship helped, but a lot of practice and hard work helped us enhance it.

How often do you guys fight and what’s the trigger?
Megha: We do fight sometimes. I think most times I get angry with him because he’s not punctual. I don’t like to wait for someone for no reason and he always makes me wait whether we are going for a party or a movie or anything else. He is very lazy.
Ashish: No, we usually don’t fight but when we do it’s because of me being late.

Any special incident from the shoots you’d like to share with us?
Megha: One incident that comes to my mind is when I was giving a shot with my personal cell phone. I had to be very angry and throw it, so I intentionally chucked it on the bed. However, my phone bounced onto the floor and I started jumping and screaming thinking I damaged it. The director had to cut the scene and everyone started laughing.
Ashish: We were shooting this scene of me rehearsing my lines in front of a mirror. Since it was to be a montage with background music, there were no real lines and I started imitating the director. Everyone laughed out loud after he said cut.

Who’s the better co-star amongst you?
Megha: It has to be me, hands down! [Laughs]
Ashish: It’s Megha, undoubtedly. She’s the experienced one and overall is a good actor, be it remembering lines, executing or improvising them.

How many times do you wish you could redo a scene?
Megha: All the time! I always feel I could’ve done better. In fact, I watch all episodes just to analyse my performance.
Ashish: In fact, for me, it’s 70 per cent of the scenes.

Rapid Fire
Your favourite corner on the sets:
Megha: The huge window seat of my room.
Ashish: Any tree on the sets.

Things you cannot do without on the sets:
Megha: Listening to music.
Ashish: Reading books.