Williams made light of the reactions Tuesday, saying her large family has 'probably watched' the scene too. 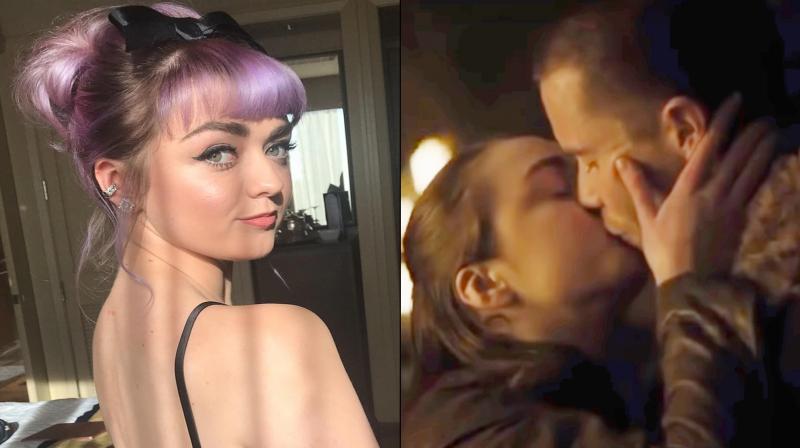 The sex scene between Arya and Gendry (Joe Dempsie) was arguably one of the most shocking moments in another buildup episode of the HBO series' final season. (Photo: Instagram)

Los Angeles: Maisie Williams has responded to the divided fan reactions following her much talked about the sex scene in the latest episode of "Game of Thrones", by pointing out that if anyone should be feeling awkward about the sequence, it should be her as her entire family watched it.

The sex scene between Arya and Gendry (Joe Dempsie) was arguably one of the most shocking moments in another buildup episode of the HBO series' final season. Two days after the episode dropped, Williams made light of the reactions Tuesday, saying her large family has "probably watched" the scene too.

"If u feel uncomfortable just know that my mother and my step dad and my 2 sisters and my 4 brothers have all probably watched this too ahahakillmeehehe (sic)" the actor tweeted.

The fans knew about the arc between the two characters - Gendry was Arya's crush and he also found comfort in her friendship, especially since they have journeyed together before getting separated. Even then, many felt, the timing of the development was amiss and there were mixed feelings aplenty. Some said Arya was too young to have sex.

"When you've been waiting for Gendry and Arya to get together for 4 seasons and it finally happens, but then they start getting naked..." a user tweeted.

"Ok, I didn't like the Arya sex scene in the newest episode of Game of Throne,and not only because it was awkward to see the person that was once a child for so long naked, but anyway the rest of the episode was a pretty solid 8.5/10, I'm kinda hopeful for the rest of this season," another wrote.

Others wondered whether the sex scene fit within her overall character arc. "Arya has *never* shown even the slightest inkling of being interested in sex; yes, she was into Gendry, but in a schoolgirl crush/friend kind of way. To go from that to, 'Hey I might die tomorrow let's bone' feels... very off," a tweeple said. One wrote, "TBH it's because we never saw her hit puberty and deal with that shit on the show... she's not OKAY, about her body or control or intimacy, but the episode appeared to gloss the not-okayness of the sex."

Some also said the trolling reeked of hypocrisy and sexism as no one raised an eyebrow when in season five Tommen, who also grew up on the shown in bed with his wife, Margaery when she was 21 and he was just a teenager. Dean-Charles Chapman played Tommen, while Natalie Dormer essayed the role of Margaery. Author Melissa Anelli shared a GIF with Tommen and Margaery in bed and wrote, "Surprised to wake up and learn people are panicking about Arya having sex after years of watching her turn into a remorseless killer it's almost like women's sexuality freaks people out more than violence or something."

On the age factor, another argument questions the silence of people when Sophie Turner's Sansa Stark was raped by her husband Ramsey Bolton (Iwan Rheon) in season five. "I find the reactions panicking about Maisie Williams's age interesting, considering that Sophie Turner is the same age and had to film a graphic rape scene and nobody was all that concerned about her being too young for THAT content, but whatever," a user wrote.

It was as if HBO knew the sex scene would spark a discussion, the network clarified Arya's age before airing the episode. HBO confirmed the age of Arya (played by Maisie Williams) as 18 years old on its official Twitter account. The network addressed the potential controversy in a light-hearted post, recalling all the troubles the character faced -- from a spoilt child, a lost teenager, a struggling blind girl to a faceless assassin.

"By age 18 in Westeros you should have: Had a pet. Moved out on your own. Travelled extensively. Had a kill list. Pretended to be the opposite sex to evade capture. Been blind for a while. Ticked at least three people off of your kill list," the post shared on Sunday read. But HBO's move did little to appease the fans who did not see the scene coming from afar. Williams earlier told EW when she was approached for the scene, she thought the showrunners David Benioff and Dan B Weiss were pulling a "prank" on her. "Everyone was really respectful" on set the day she filmed the scene, she said.

The actor added Benioff and Weiss let her be the one to decide how much nudity to reveal on camera. "So it was that moment where she says, 'We're probably going to die tomorrow, I want to know what this feels like before that happens.' It's interesting to see Arya be a bit more human, speak more normally about things people are scared of," Williams had said.