Bhabho is back for round two in TV

This character from Diya aur Baati Hum is the only familiar face in the show’s sequel to be aired soon. 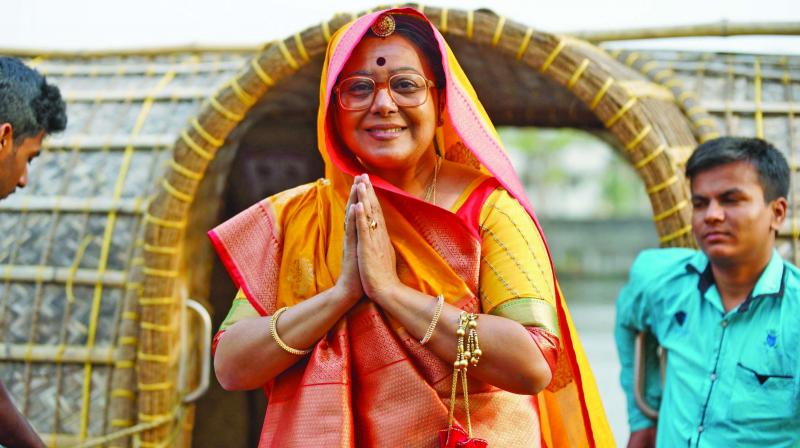 The iconic show, Diya aur Baati Hum, is returning with a new name and brand new characters. The sequel of sorts will be called Tu Suraj Main Sanjh Piyaji. Despite the new faces, the makers have retained the popular character of Bhabho though, played by veteran actress Neelu Vaghela and have entrusted her with the responsibility of taking the story forward.

Talking about the upcoming sequel, an excited Neelu says, “Generally sequels don’t come back in seven months flat, but I am glad we have attained that breakthrough. The audience has been really kind to us in the first season, and it is their love that’s made things work out so soon. The show has taken a 20-year leap, so there will be a new Rathi Family now. We will be spinning new stories with a fresh twist. I can’t reveal much of the plot at this point, as I don’t want to spoil the surprise element,” she adds, “Expectations are riding high already on this show, so it will be a huge challenge for us to meet them. Hope the audience welcomes us back with the same enthusiasm and fervour.”

The Bhabho we saw in the first season was a strong woman with a very controlling attitude. The character in the sequel however, looks mellow in the second installment of the show. Point that out and the actress explains, “It’s a 20-year leap so Bhabho is a little older now. There is a change in her get-up, but she is pretty much the same person that she used to be in the first season.” Isn’t the actress bored of doing the same thing over and over gain? “I am not bored of playing Bhabho. I like the character very much, and I think it’s a great opportunity to play it again. I got many offers but I politely turned them down. Many people were upset with me for not taking them up but somewhere I knew that the show was coming back and given my attachment with the character, I knew I just had to do it again,” shares Neelu.

Is she still in touch with co-stars Anas Rashid and Deepika Singh? “I am not the kind of person who will forget people. But I’ll also not blame anyone if they don’t bother to remember me. I am always ready to catch up with whoever wants to meet me,” shares the veteran actress.

As of now, Neelu wants to concentrate on the content rather than worry about the show’s performance. “Right now we are really not thinking about whether the sequel will work or no. We are excited to be back and working hard on the new storyline and characters. It is difficult for me to say whether the new pair will be able to recreate the same magic but I have seen their work and I think they’ll create a different identity for the show and themselves.”