Entertainment   TV  07 May 2019  LOL! Coffee cup in GoT S8 episode 4 is new topic of memes for netizens; check out
Entertainment, TV

LOL! Coffee cup in GoT S8 episode 4 is new topic of memes for netizens; check out

When the night is dark and full of terror, even the lords and queens need coffee. 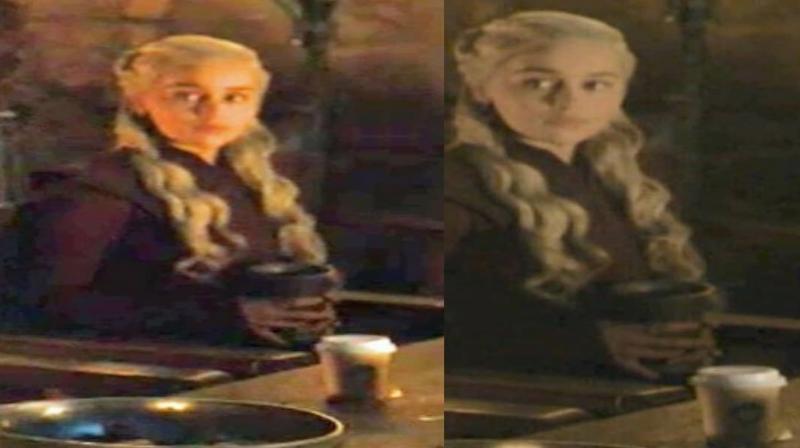 Washington DC: When the night is dark and full of terror, even the lords and queens need coffee. The latest episode of Game of Thrones featured a Starbucks coffee cup right in the middle of an intense scene and Twitterverse can't seem to get over it.

If you look closely, the to-go coffee cup appears at roughly 17:50-minute mark in the episode titled, 'The Last of the Starks', which aired on Sunday.

The cup is positioned on the grand table of the nobles, in front of Jon Snow's (Kit Harington) seat. However, in that particular scene, Snow is not seated on his chair.

Soon after the episode aired on HBO, meme lords started flooding Twitter with some hilarious jokes.

Taking a jibe at the plot of the show, a user wrote, "That Winterfell Starbucks cashier ain't ready to write Dany's name on her coffee cup #GameofThrones."

Posting an animated version of a Starbucks cup, with Daenerys Targaryen's complete title scribbled on it, another user wrote, "Close up of that Coffee cup mistake in Game of Thrones."

Close up of that Coffee cup mistake in #GameofThrones pic.twitter.com/FighJzudwS

"Daenerys Stormborn, the Unburnt, Queen of Meereen, Queen of the Andals and the First Men, Khaleesi of the Great Grass Sea, Breaker of Chains, and Mother of Dragons," the cup read.

Referring to the third episode of GOT season 8, which was criticised by the audience for being extremely dark, another fan wrote, "Now I know why they made the Battle of Winterfell so dark."

"If Daenerys started a coffee chain, it would 100% be called My Sun and Starbucks," wrote another user.

If Daenerys started a coffee chain, it would 100% be called My Sun and Starbucks.#GamefThrones

Another wrote, "The real reason Rhaegal's wing was damaged? Daenerys clipped it on the Starbucks drive-thru getting a vanilla latte with oat milk."

Daenerys clipped it on the Starbucks drive thru getting a vanilla latte with oat milk #GameOfThrones #GoT pic.twitter.com/2kga4ILmQO

As HBO's ultra-popular drama series 'Game of Thrones' is in its final season, every little detail from its latest episodes is making headlines and breaking the internet.

The teaser of Episode 5 was released following the airing of Episode 4 on Monday. The teaser features the pivotal characters bracing for the war between Daenerys Targaryen and Jon Snow's forces, and Cersei Lannister's army in Kings landing.