A force to be reckoned with

Gwendoline Christie talks about her role in Star Wars: The Force Awakens, playing a Stormtrooper and more. 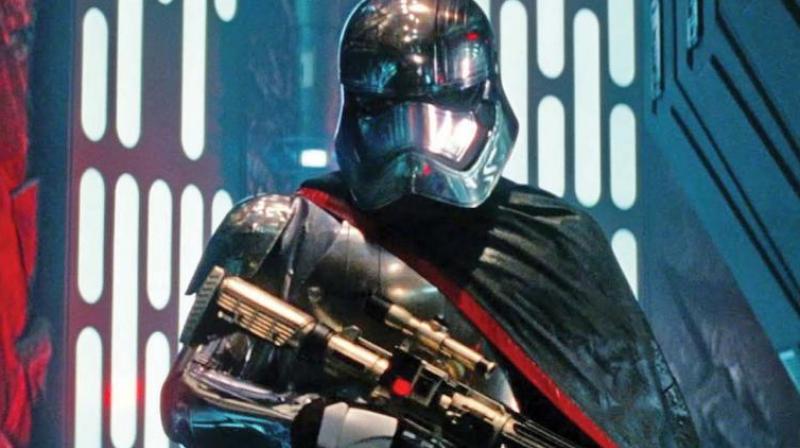 From becoming one of the most loved characters in the Game of Thrones series (Brienne of Tarth) to playing a Captain Phasma in the latest installment of the Star Wars series The Force Awakens, Gwendoline Christie has sure come a long way. With the movie, she only seems to be strengthening her image of being a strong woman to watch out for when it comes to fantasy and sci-fi.

Speaking about the challenges of playing an iconic role inside a Stormtrooper helmet and suit, she says, “This role has been very exciting to me because you start to realise that acting isn’t about the subtleties of facial expressions all the time. It isn’t just about the way in which you make your clothing look, it’s actually about the way you choose to move your body; that’s what dictates the character. For me, it was really exciting to start to look at a physical language; to look at what was neutral about it, about what might indicate her gender and what that might mean — and where you put the emphasis on your body. That was part of my training in drama school, which was very helpful.”

She also goes on to elaborate about the costume she had to wear, “It was remarkably quick and easy to put on the costume. And let’s not forget that I was so overwhelmed and excited by playing this role that things like not being physically comfortable stopped registering. What was interesting about it was having some of your primary sense diffused. Particularly as a female actor, that’s interesting because other senses become heightened and you have a totally different experience of a character. It can be very exciting and interesting to utilize that to form the character and their decisions,” and adds,  “It changes the way you stand. It also changes the way that you move your body. You learn to fight in a way that seems to express strength - and it’s probably a lot more strength than I have personally. I find it very interesting to play these parts where it is as much about your body as the specificity of one’s voice and what you’re saying.”

Gwendoline has appeared in a number of fantasy and sci-fi roles on television and in movies, including Star Wars, Game Of Thrones and The Hunger Games. What is it about them that intrigues her? “I worked in the theater for five years before I ever did any screen work. Back then, I did all classical work, so it was never a choice to be genre-based - but you want to be involved when amazing projects like these three come up.

The reason I was particularly interested in these three franchises is that they are doing something more; these are three brilliant stories that are very progressive, particularly with this franchise, and that interested me. I think their decision to cast me was very imaginative because I’m perhaps not the first person you’d think of to play this role,” the actress answers.

She concludes by responding to the question of whether she feared or was excited about joining this legendary franchise, “It’s excitement because I’m phenomenally lucky. I didn’t expect it. To be able to move from something as spectacular as Game Of Thrones to The Hunger Games to Star Wars, and to be able to have these challenges of the unknown is thrilling.”