When Bigg Boss got pissed off

Reality TV hit a new low this week when its most controversial figure flung pee on fellow contestants. 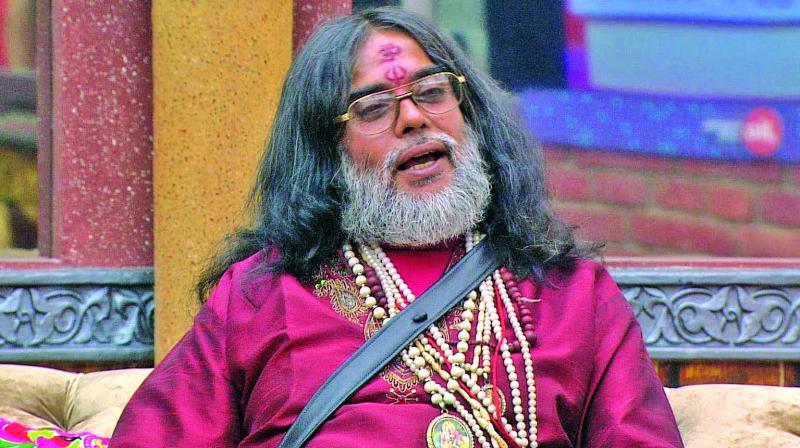 Currently in its tenth season, Bigg Boss has seen some difficult contestants. From Kamaal R. Khan hurling bottles to Ajaz Khan intimidating a fellow inmate, the show has seen the ugly side of celebrities. However, this season has earned the reputation of being one that’s seen not one but two contestants being disqualified for inappropriate behaviour.

While Priyanka Jagga last month was kicked out by host Salman Khan himself for sluring, Swami Om has been evicted, for throwing urine at Bani J and Rohan Mehra during a task.

What’s interesting is that not just the regular viewers of the show, but former contestants themselves had been fed up of the ‘commoner’ Swami’s antics, some of which involved pulling his pants down during tasks and breaking doors when enraged. Understandably, accusations of preferential treatment by the makers of the show towards Swami Om flew thick and fast.

“If someone is expecting Bigg Boss to be ethical and set moral standards and values, something is seriously wrong with that line of thought,” says the most recent evictee of the show, Gaurav Chopraa. “Swami Om needs some real help. I was one man standing against him with Bani and Rohan, and I knew the moment I was out of the show, he’d do something miserable to them, which he did.”

Rakhi Sawant, who was part of the very first season of Bigg Boss is of the opinion that fights involving the contestant have been extremely ugly. “Swami Om has been the worst contestant in the history of the show so far. He has been insulting women in the house and the kind of negativity we saw on the show because of him has been appalling. He’s a devil in the garb of a saint. Even after multiple warnings from Salman, he refused to mend his ways.”

The fact that other contestants respected Swami Om’s age — he’s 59-year-old — probably went to his head, says former contestant Karishma Kotak. “I have been following the show since the beginning and initially everyone looked up to him as a an elder figure and treated him with a lot of respect that I think got to his head and he started behaving atrociously. Reality TV can be fun to watch but what he did on the show was way too real and wasn’t entertaining at all.”

An avid watcher of the show, Gaurav’s brother Raghav Chopra believes that the creative team of the show gave a long leash to the contestant. “The general feeling is that he was outrageous; the makers felt he was a bit of a maverick and does crazy things at odd times and that grabbed viewership and pushed TRPs up. The makers coddled him, and treated him with kid gloves but after a point of time it got out of hand and he lost it. Part of this is due to the makers extending him a long leash.”

He adds, “What’s worse is that over the weekend, he told Salman during the Weekend ka Vaar show that he knows that all he needs to do to make Rohan run away was to throw pee on him. And he went ahead with the threat.”

Gaurav reveals that there’s a lot more to the man behind the scenes. “He’s a tantric with a criminal and political bent of mind. He’s constantly talking about the ills he’s committed outside the house and about killing people. There have been times when he has threatened people inside the house and was seen doing weird things like keeping spoons under people’s pillows. There were oranges marked with shapes on people’s beds and he admitted to practise black magic.”

While calling his experience of living with Swami Om in the house strenuous, Gaurav says that the audience needs to put their foot down about what they want to watch on the show. “It is obviously strenuous to live with such an unstable person under the same roof. The show is bordering on the brink of what is acceptable, and it is up to the audience to decide what they find entertaining and what they don’t. Being scandalised by certain behaviour is different and if they don’t find this entertaining, they should stick to their ground and let the world know what is unacceptable to them,” he concludes.

Colors channel remained unavailable for comment on the episode.