Shamata Anchan talks about her co-star Sameer Arora from Bin Kuch Kahe. And the admiration, as we found out, is mutual. 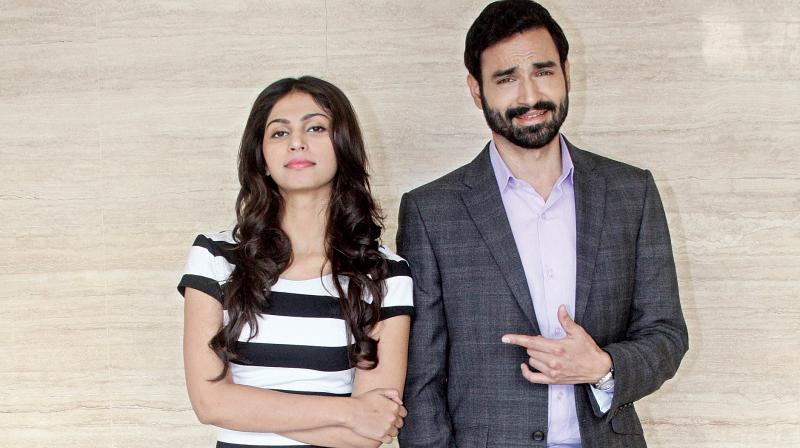 The love for tea-time chit chat and a thorough professional attitude at work is what binds co-stars Shamata Anchan and Sameer Arora together. In a candid interview, the two talk about their off-screen chemistry, on-screen drama and more.

You play journalists on the show. Have you drawn inspiration from a real journalist?
Shamata: I haven’t taken any reference from a real life journalist. Our producer and directors were clear about what they wanted from Myra’s character. They did not want me to borrow from any character, just do my own thing.
Sameer: It’s a light- hearted romantic show, and we were briefed well about what was expected from us. We didn’t have to seek any reference point.

What’s your relationship like off-screen?
Shamata: We are professional actors. We don’t hang out together when we’re not working, but we are very comfortable with each other on the sets.
Sameer: The set is full of young people and we all have a great time together.

Jaipur is a beautiful city. What has been your biggest takeaway from it as a location?
Shamata: The food. I am a big foodie, and I really love to binge. Its historical influences add to its beauty as well. The city has managed to sustain its culture over the years and I think that is commendable. Having said that, in our show, we’re showing the modern side of Jaipur. Our characters are independent, modern, fashionable.
Sameer: The city’s culture and hospitality is the biggest high for me. People here are still rooted in traditional values, and have maintained their heritage beautifully. They have always welcomed their guests with open arms. Shooting here has been a blessing of sorts, as we have gotten a chance to explore so much.

What’s the one ritual you follow on the sets?
Sameer: We have tea together on the sets. It infuses a sense of togetherness and team work which motivates productivity. We all sit together and discuss our scenes and life in general.
Shamata: We’re all tea lovers on the sets, so whenever we have some time, we sit around and have a cup of tea while chatting about this, that and the other. It has to be the most peaceful part of our day.

You’ve shot intimate scenes together, one of which was very close to a particular scene from Dilwale Dulhania Le Jayenge (DDLJ). What was it like?
Shamata: We haven’t tried to recreate any scene from DDLJ. It’s a scene about a one-night stand, with a twist that will be revealed only later. The director made me very comfortable while shooting this scene. There were very few people on the sets. Only those who were required to shoot were allowed to remain present.
Sameer: It was not an attempt at recreating anything that the legends SRK and Kajol have created — not even close. We have come up with something fresh and given it our best.

What’s been the biggest high for both of you to play the leads on this show?
Shamata: It is a big responsibility, we need the audience to connect with our characters. There is a huge pressure to make it relatable.
Sameer: I never looked at myself as the lead — it’s  team work. The show works not just because of the leads, but because of everyone on the sets. But yes, there’s a lot of responsibility that the role brings with it.

Which one has been the most challenging scene on the show so far?
Shamata: The most challenging part was shooting an outdoor scene in the scorching heat in Jaipur, where I was reporting something. There was a lot of chaos in the background, because that’s what the scene required. It was difficult to control the crowd and mouth long dialogues, but we managed to shoot somehow.
Sameer: I will not be able to disclose it right now, it’s yet to come on air. I hope the viewers will love it.

Do you have awkward moments romancing each other on screen?
Shamata: Shooting for romantic scenes is generally awkward if the co-star is not cooperative. Luckily, my co-actor Sameer is a true gentleman. He totally understands my side of the story, so he lightens up the mood by cracking a joke before the start of the scene. He is also from the film industry and worked with Sanjay Leela Bhansali for Ramleela and knows all the aesthetics of shoots. He shares valuable tips.
Sameer: Romantic scenes are a part of the package. But when you are a professional actor,  these scenes are not awkward, but they are more like a job that has to be done. These scenes get easier when you have a good co-actor. I feel fortunate that we share a good bond.

Who takes more re-takes between the two of you?
Shamata: I believe that the number of re-takes doesn’t matter. One perfect take is all that is needed. So, we always try to give our best and don’t count number of retakes taken. (Laughs).
Sameer: Shooting is not about re-takes; it is about connecting with the audience. It does not matter if you take a thousand retakes, what matters in the end is that one perfect shot which the audiences see — the final outcome. We all take retakes to give our best.

Rapid Fire
Your favourite corner on the sets:
Shamata: The chair in my makeup room.
Sameer: Spot dada’s tea room.

Your favourite food on the sets:
Shamata: Tea.
Sameer: Tea with Parle-G.

Your 2 am buddy on the sets:
Shamata: Nirvana and Nikhil.
Sameer: Nirvana Sawhni who plays Rhea Kohli.

Things you cannot do without on the sets:
Shamata: My jacket and my green tea.
Sameer: The camera.

Your favourite line on the sets:
Shamata: “Break.”
Sameer: “Action!”

Your stress buster on the sets:
Shamata: My actor friends, with whom I hang out.
Sameer: When technicians smile.

Your dream date:
Shamata: Ranbir Kapoor at Ibiza.
Sameer: I would rather not reveal.
Let it be a surprise dream date.

Your wildest fantasy:
Shamata: Going back home to Mumbai.
Sameer: An Oscar in my hand.