Anamika Majumdar's NGO Faith in India gets a boost after she won the Rs 1-crore prize on the popular TV show. 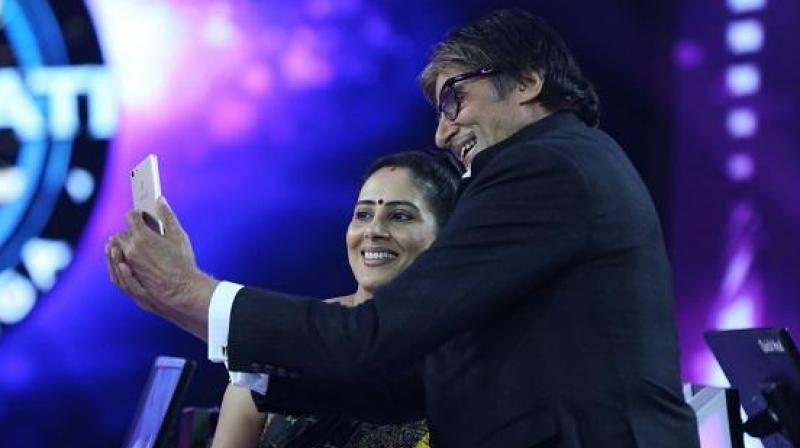 Anamika Majumdar and Amitabh Bachchan pose for a selfie after the feat.

Mumbai:  Jamshedpur-based NGO worker Anamika Majumdar, who became the first millionaire of 'Kaun Banega Crorepati 9', says she was trying to get to the 'Hot Seat' since the first season of the uber popular game show, aired in 2000 with megastar Amitabh Bachchan as its host.

A huge fan of 'KBC', the 41-year-old homemaker adds she will dedicate most of the winning amount to her NGO, Faith in India, which works towards the upliftment of women and impoverished children in Jharkhand.

In an interview with PTI, Majumdar says, "I participated this time in the show because of the prize money. But I had not imagined I would get an opportunity to play the game...

"I am going to spend most of the money on my NGO. I want to do some constructive work. Mr Bachchan also asked me to invest the winning amount tactfully. I will follow his advice."

Talking about her social work, she says that the organisation tries to provide a better chance at life through education.

She adds, "We try to minimise their problems as much as we can."

Majumdar says despite exhausting all the four lifelines, she was hopeful that she would become a millionaire.

"When I had won Rs 50 lakh, I was a bit hopeful that if the question is somewhat easy, there are chances of me becoming a crorepati. When I got the question I was thinking about the answer...

"(When) I saw the options I was almost sure about the right answer. Although the question was not difficult, the options were confusing. But I got it right," she says.

The episode aired on Sony Entertainment Television channel on Tuesday.