The actress has already finished filming her scenes for the show’s shortened season seven. 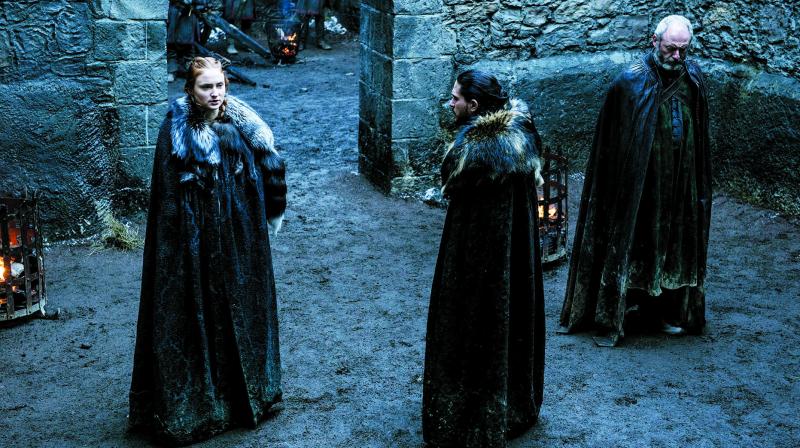 Sophie Turner with Kit Harrington and Liam Cunningham in Game of Thrones.

Sophie Turner, who essays the role of Sansa Stark in Game of Thrones, is already mulling over the endgame of her run on the show, and that of her character. The actress has already finished filming her scenes for the show’s shortened season seven, which is expected to premiere some time in the summer of 2017.

In the fag end of last season, the Starks’ known half-brother, Jon Snow, was declared King in the North. Sansa could’ve well been the Queen of the North, or ruled side by side with him. However, the alliances in the North are a bit more complicated, and Sansa’s exchange of meaningful looks with Littlefinger is ominous, with more complications expected.

Speaking to Vulture, Sophie explained her situation. “At the end of the season, Sansa gets a taste of power — and it’s the first time that she’s had that ever, really. She feels like it’s deserved, because she did so much for Jon and the North, so when she saves the day and doesn’t get any recognition for it, it was like she had that first taste of power and then was immediately stripped of it. She was stripped of the respect that she really feels she deserves. She was trying to give her input to Jon and trying to be a collaborative leader, but it’s difficult when it’s a patriarchy and when there’s sexism. It would be a real adjustment for Jon to listen to her and do what she says,” she said.

Sophie adds that there’s a lot more in terms of power that Sansa is left to explain, “So she was looking to Littlefinger like, oh, you’re right. Maybe that pretty picture you painted of me on the throne and you by my side isn’t such a bad one. And then there’s the smile as well, her walking away after killing Ramsay. That’s also quite interesting. You wonder if it’s just a smile because it’s her first kill, because this man is out of her life, or whether she’s going to get a taste for it. Whether she enjoyed it. Whether it’s a power trip. But she definitely is a lot more powerful, and it’ll be very interesting to see how she handles that coming up this season.”