Far-fetched plot twists are the go-to mantra for makers to salvage their shows. 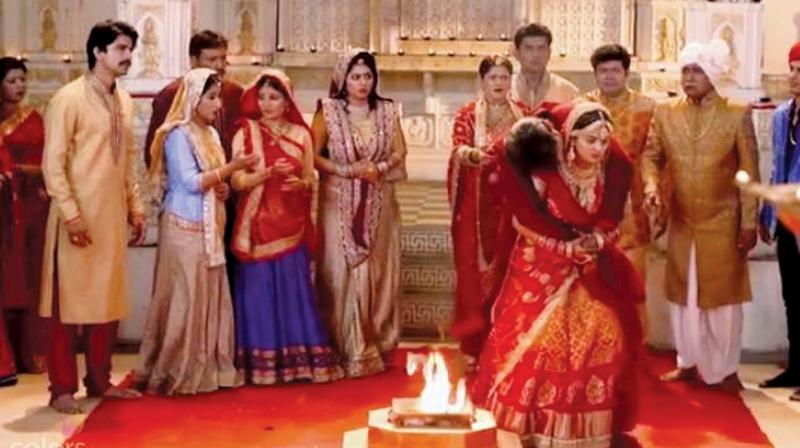 A still from the daily soap Devanshi showing the marriage. (Photo: Voot)

Indian television has been under fire in the past few years, due to its overtly melodramatic content. But there is little that can forestall the makers from adding plot twists in a bid to gain TRPs.

Only when we thought that the old formula of bringing the dead back to life has finally lost its charm, TV shows are now going a step further with rather unreal plot twists. Colors’ popular show Devanshi recently aired an episode where the female protagonist marries the corpse of her dead husband presumably with the result that God will reward her for her belief and bring him back to life (which eventually does happen as the plot moves on). While one may rightly assume that weeping in sorrow or rushing him to the hospital would’ve been an ideal option for the bride, the makers beg to differ.

Star’s Dil Bole Oberoi, too, doesn’t care too much for logic. In the show, a dead body that has been lying in an icebox suddenly comes to life, puts on the mask of the female protagonist and proceeds to dupe the entire cast of the show.

Mudit Nayar, the actor who played the dead husband in Devanshi, agrees that the plot was far-fetched. He shares, “I wasn’t sure how to react when I first heard it because it was very weird and unreal. Because it is my show I had to believe it or else I wouldn’t have been able to do justice to the character and that would reflect on-screen.”

Ironically, the plot of the show aims at busting the myths around superstition, so aren’t the makers doing the exact opposite, we ask, “There are two ways to look at it, you can look at it in a scientific way or take it as a miracle. There is a very thin line between looking crazy while doing it and doing it convincingly.  Twists and turns have always been a resort to gain TRPs. Such emotions connect very well with the audience and if we get a nice balance of emotions, drama and content, then the show will sell,” says Helly Shah, the female lead playing Devanshi on the show.  In the past, in spite of having some really good drama, the show wasn’t faring well, feels Mudit.

“We thought that this (the new plot twists) would work. In the end, there is a lot of money invested in the show and producers have to get their returns. I have been receiving mixed response with people calling it a chamatkaar and others who can’t really gauge what is happening on-screen so there is nothing which can satisfy everyone,” he says.

A few producers who do try bringing in fresher perspectives get lost in oblivion, rues Nivedita Basu who has worked with Balaji Telefilms for over 15 years and has done over 85 daily soaps with Ekta Kapoor.  She turned producer with Meri Awaaaz Hi Pehchaan Hai with actors like Deepti Naval and Amrita Rao. However, it didn’t do really well in the TRP game, “On television, the drama and masala sells. The active TV audience across all the GECs (General Entertainment Channel) wants the same thing — edginess, drama, and a grand experience. As a producer, I loved Meri Aawaz Hi Pehchaan Hai but sadly, it didn’t work that well and had to be pulled off,” she says.

But are shows with good content even working on television? According to Nivedita, the milieus that these shows cater to are not the educated, upwardly mobile, metro residents. “These shows are perfect for the audience who watches them,” she points out. “The audience are not the classy Amazon-shopping-Netflix-watching urban audience but two- and three-tier cities that want to watch such shows,” she says.

With an air of nostalgia, she adds, “Before the show goes on air the channel knows through research what kind of content is going to work and the makers know it as well. If they have to make something edgy and funky they will not approach TV but go digital, because gone are the days when people would rush home to watch their favourite shows.”