The miracle of music

Sujeet Desai, who has down syndrome, is not just an expert in several musical instruments, but is also an accomplished sportsman. 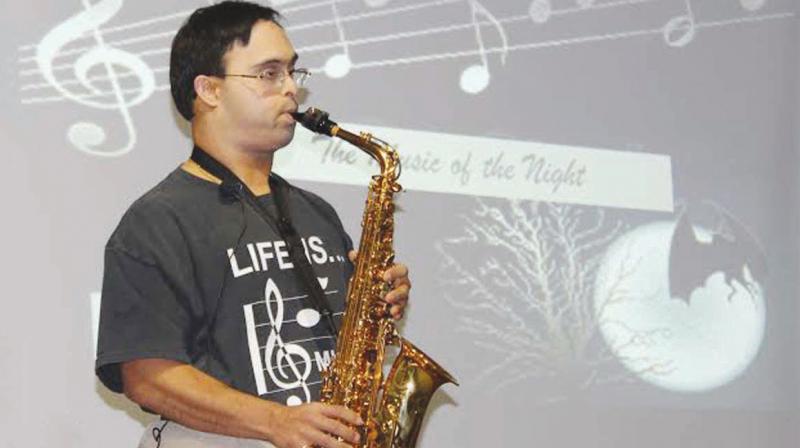 Sujeet Desai plays the clarinet in the centre of the living room, his fingers finding the notes with uncanny surety as he coaxes Mozart from the brass flute. This is only one of the instruments that the 35-year-old American Indian, who has down syndrome, can play. Though it began as a part of alternative therapy for his disability, music soon became a passion for Sujeet, who began his journey with violin lessons and soon also picked up the piano and the clarinet. Not only that, he also taught himself how to play several other brass instruments like the bass clarinet and saxophone, as well as the drums. “Playing the other brass instruments were not that difficult because I already knew how to play one of them. As for the drums, it’s all about rhythm, so once I kept that in mind, I picked it up quite easily, too,” recalls Sujeet.

In Mumbai for a short visit with his family and for an awareness talk on disability, alternative methods of learning and to advocate a support group for parents who have children with down syndrome, Sujeet and his mother, Dr Sindoor Desai, look back on the journey that the young self advocate has gone through to get where he is today.

As a young boy in Syracuse, NY, Sujeet not only picked up musical instruments with amazing ease, but also showed quite an aptitude for sports. His parents enrolled him in Taekwondo when he was around eight years old and over the years, Sujeet kept the practice alive. “He has now surpassed even his master and has a second degree black belt. The grandmaster, who is a close family friend, is so impressed with Sujeet,” says a proud Sindoor.

Just like his interest in multiple instruments, Sujeet’s interest in sports is also varied and includes swimming, skiing and track and field, which he started when he was studying at a music academy in Massachusetts. “I was also a part of the World Paralympic Games in 1999. And in 2009, I performed for the opening ceremony for the World Games with Kenny G, who was a guest there. It was like a dream to meet him,” Sujeet recalls.

Another memory that the musician cherishes is his trip to London where he shot an advertisement for Paralympics awareness. However, one of Sujeet’s favourite memories is not of his performances or shooting for the ad, but the view from the London Eye.

London is only one of the many cities that Sujeet has been invited to in the capacity of a self-advocate for disability. When he is not travelling the world, the musician, with Down Syndrome, enjoys living independently in his flat in Niagara Falls, NY and performs paid gigs at hospitals, churches, schools and other institutions. “I am also part of a band where different members have different disabilities. We all practice together. In fact, I have a gig coming up, right after I go home,” says Sujeet.

While Sujeet is definitely looking forward to going home again, he also admits that his trip to India has been a fun learning experience. “This is the first time that I’m seeing my family in over a decade. We also travelled all over South India, to the beaches and resorts. My visit to Munnar was especially memorable. It had some lovely tea gardens. They also had dancers who performed a kind of martial arts, but it was completely different from Taekwondo, and seemed a bit funny actually,” he laughs.

A man of simple dreams and the determination to make them come true, Sujeet is looking forward to resuming his routine in Niagara Falls, maintaining his musical and sports skills, and regularly visiting with his parents.