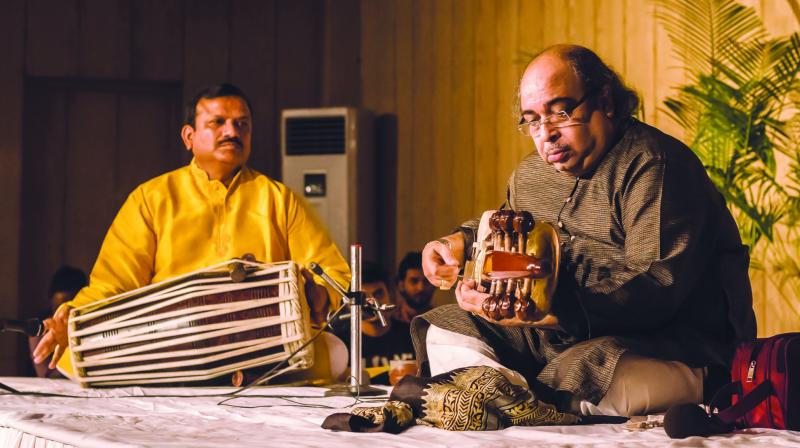 Naad Yatra’s experimental concert last week at IGNCA’s auditorium was a thundering success, despite the constant downpour of rain all evening. The packed hall needed extra seats to accommodate the thronging surge of expectant, mostly young listeners. A welcome change was the presence of several musicians in the audience who were given front row seats; something that concerts in our capital are not known for; the focus being more on seating senior bureaucrats and dignitaries in the front.

The experiment was that all three concerts that evening were all in Raga Yaman; the formats “khayal”, “dhrupad” instrumental, then “dhrupad” vocal. Also, no accompanying instruments other than percussion and “tambooras” were permitted. The focus was on creating a mood of “dhyaan” or meditativeness, the assumption being that the lighter forms of North Indian classical music were not conducive to creating this mood, and that accompanying instruments distract the artist.

Raga Yaman of course is a Raga of great potential, can be expanded easily, it is rightly said to create a mood of “kalyan” or benevolence; it also has scope for enormous lyricity. Yet to insist on 3 major artists sticking only to the one Raga was perhaps an imposition on artistic creativity that could perhaps have been avoided. Starting with a khayal rendering of Raga Yaman (Aiman) by Pune based Gauri Pathare, the evening went on to an unusual sarod concert by Kolkata based Pt Tejendra Narayan Mazumdar.

The original format of all North Indian classical music is dhrupad; a style which is staid, embellished without light touches, with stricter rules of progression. During “alaap”, and “jor”, the progression is quite different; it is not a matter of merely reducing the speed, or lingering more on a note to simulate the “dhrupad” style. The improvisation during the “laya” of “dhrupad” compositions too is more rigidly adhered to, with “dhammar” (14 beat “dhrupad” time cycle also referring to compositions in that “taal”) “upaj” (improvisation) conventionally following the “bols” of the composition. It requires a definite specific training or ends up being a hollow imitation of “dhrupad”. Pt Tejendra Narayan Mazumdar’s “dhrupad” recital was remarkable – one has not heard this style from him at length before and he admitted he had played a full scale “dhrupad” concert for the first time. As he said, though the original training he received was in a “dhrupad” format, most of his career of over 35 years, he had played what is today the current instrumental style.  Certainly his concert did not display any signs of it being a novel experience for him. His sonorous “meends” during the “aalap” tugged at the heartstrings, his “jor on the other hand was redolent with “gamak”, (movement within notes) sombre and without frills. Slowly he increased the speed to show traditional sarod “bols” (strokes), culminating in “taar paran” accompanied by the pakhawaj, played by Pt Akhilesh Gundecha. “Taar paran” is a veena tradition where the “bols” of the pakhawaj, in their compositions called “parans”, are played out on the wires (taar).   Nowadays no body perhaps learns “parans” any more so “taar paran” is rarely heard on instruments. It was truly a grand sound, with both instruments resounding majestically together, creating a wonderful musical picture.

What impressed was the total change of style of playing – a fan admitted that this was like hearing a different player, the picture he created was so different in texture and aesthetics. Another said “it was like he was on fire”; there was so much action on stage!! Certainly the “dhammar” composition, accompanied with active participation by Akhilesh Gundecha left one breathless, trying to keep pace with the “laya”. There were frequent complicated “tihais”, intricate “layakaari” has of course always been a part of the Senia Maihar offering; both his Gurus, Ustad Bahadur Khan and Ustad Ali Akbar Khan were master “layakaars”(masters of rhythm). What was especially astounding was the fact that both the masters, Tejendra and Akhilesh were collaborating together for the first time in concert; they sounded so much in tandem! The final offering was in “sool” taal, 10 beats, another cycle usually played in the “dhrupad” tradition. Here, the maestro played his own composition. His immense creativity has been given suitable freedom to express itself correctly due to his vast knowledge of Raga, in the tradition of his “gharana”. The variety of stroke work, elegant unusual aspects of the Raga being enunciated, as well as the grandeur of the formal “dhrupad” style presentation were immensely satisfying; one was left feeling bereft after the succinct under 50 minute recital. Without doubt, Tejendra has emerged as the face of the younger generation of Maihar “gharana” exponents. His “baaj” has the virility of Ustad Bahadur Khan, his first guru for more than 18 years till the Ustad’s death in 1989; and the lyricism of his 2nd Guru Ustad Ali Akbar Khan, under who he trained till his death in 2009.

One hopes that the organizers next time invite not more than 2 fine artists per evening so there are no time compulsions in the process of taking one to a state of “dhyaan”. Indian classical music needs time to unfold and develop a mood; this cannot be created with Time, the sword of Damocles hanging over one’s head.

The evening ended with a recital by the Gundecha Brothers, Padma Shri and Sangeet Natak Academy awardees Pt’s Umakant and Ramakant Gundecha.