As far as I have been taught, the aim of music is go further, cross new boundaries. One cannot stop musically, there has to be development. 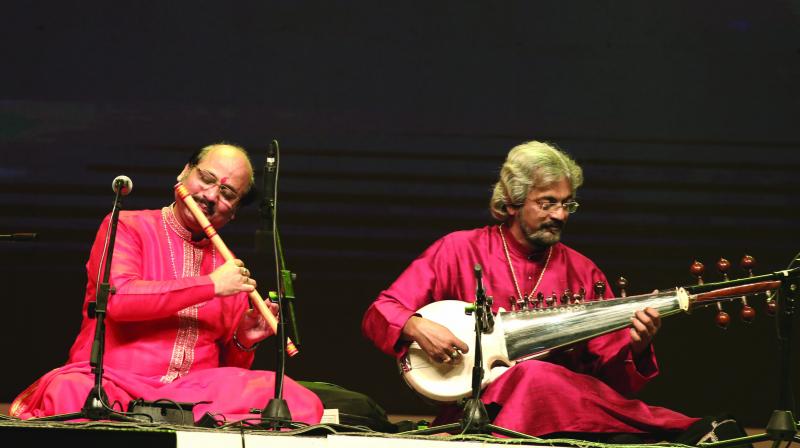 An extremely unlikely jugalbandi of flautist Ronu Mazumdar and sarodist Debjyoti (Tony) Bose is taking the music world by storm. Ronu belongs to the Maihar gharana, and is known for his flamboyance on stage as a musician. He has made forays into fusion music, collaborates incessantly with Carnatic musicians, and refuses to be pegged into any one musical slot. Tony has a more mixed pedigree musically — he learnt the tabla too, is the brother of the iconic Pt Kumar Bose, his mother and Guru learnt from Senia Ustad Mohammed Dabir Khan and Ustad Ali Akbar Khan, while his main Guru remains Ustad Amjad Ali Khan of the Senia Bangash tradition. But as a musician he has remained more or less in the traditional instrumentalist mode.

Musically they seem totally mismatched, until one hears them together in concert. Despite the fact that Ronu has way more visibility as a musician; somehow this does not come in the way when he plays with Tony. After an extremely successful jugalbandi played to a crowd of over 20,000 avid listeners, at 4 am on a cold December morning in faraway Dhaka, the duo is ready for their next encounter in Kolkata on February 3. Some excerpts from a chat:

Please tell me how this extremely successful jugalbandi started?

Ronu: I remember it was around 10 years ago. I have always had the deepest link with Pt Kumar Bose, who used to always accompany Pt Ravi Shankar, my Guru, on the tabla. I have known him since the 1980s. In Kolkata, there was a large festival, the Indo Occidental Festival at Kala Mandir, and Kumar da called me up and suggested a jugalbandi. At that time my jugalbandi with the saxophonist Pt Kadri Gopalji was very popular, and I suggested that. Kumar da said; try a jugalbandi with my younger brother, Debjyoti. I was not convinced, though I knew Tony quite well. But Kumar da said listen to me, I am your elder, think about it, try it. It has merit.

We rehearsed for the first time together at Ramkrishna Mission Kolkata and I remember we played Raga Hansadhwani — the rest is history! Pt Anindo Chatterji accompanied both of us on the tabla, while Kumar da was part of the audience; he wanted to attentively hear how we sounded together.

Tony: My brother Kumar da is quite a visionary; he felt the era of the duets of yore, where history was created on stage — Pt Ravi Shankar/ Ustad Ali Akbar Khan; Ustad Vilayat Khan/ Ustad Bismillah Khan; Pt Shiv Kumar/Pt Hari Prasad — was over. Yet jugalbandis have and will always have an irresistible appeal, if played by 2 musicians who have one “soch”. Dada felt temperamentally, and musically Ronu and I were similar. On stage, the aim has to be — to create something musical, something that has one identity; that is not pulling in different areas.

But your instruments are so different, with so many different physical constraints! How have you managed to create music together that is seamless?

Ronu: Well for me, the physical difficulty is greater, as I have had to play in a very different scale — B flat, where my normal pitch is much lower! This was and is a huge challenge; I have to keep shifting between my large and small flutes! Definitely I don’t hide showing the specialty of my instrument but make sure I don’t focus on what his sarod cannot do.

Tony: Did you notice when I played the “dir dir” baaj of the sarod, he simply complemented my notes with a breathy meend! I kept on the drone of jhala which is the strength of my sarod, while he traversed the tones! The music should flow effortlessly, not be thrown around from one to the other. Soch ek honi chahiye.(the musical thoughts should be one).

Both of you use a lot of layakaari in the concert. Is this special to the jugalbandi?

Ronu: I have consciously tried to incorporate a lot of laya work in my playing. My Guru did this too. I played a lot of dhammar taal and other dhrupad taals, and have even recorded with the great Banaras layakaar, Pt Kishan Maharaj; I don’t think in my generation anyone else has recorded these taals with him. I wanted to bring in the depth of “beenkari” into the bansuri. I have always wanted to take my flute further, tried to bring in dhrupad elements. The flute is always perceived as being only light and lyrical, I have tried to show its not so.

Tony: (interjecting) Nobody can play the flute in this style; he has been a path opener in this respect. As for me, I learnt the tabla myself so yes, my music has always had a strong laya element.

Having been trained in different gharanas has not been a hindrance?

Ronu: Gharana is your identity, it is not your musical expression.

Tony: As far as I have been taught, the aim of music is go further, cross new boundaries. One cannot stop musically, there has to be development. Your training cannot inhibit you in creating meaningful music!

You have been playing together for around 10 years. Where do you go from here?

Ronu: In the last 10 years we have played around 40-45 duets together, I think we will continue forever. We play as one, have the highest respect for each other as musicians and friends. We used to meet earlier too, were friends but yes the bonding on music on stage is indeed special. I have played with practically every Carnatic musician, instrumentalists as well as vocalists from Balmuraliji to Bombay Jayashri, with so many Hindustani musicians too; this is different.

Tony: It’s strange, that we have many times ended wearing the same color on stage too — totally unplanned! It’s like we are communicating with each other at another non physical level. I think instinctively we will know how to proceed to new things. We don’t try to innovate; the new “soch” comes without pre planning. It has to be spontaneous. Soch ka milan ho raha hai, and hota jayega (our musical thoughts intermingled, and will continue to intermingle).