Entertainment   Music  29 Oct 2018  The history of sarod is rich but obscure
Entertainment, Music

The history of sarod is rich but obscure

Ustad Baasat Khan, who with Ustad Niamutullah Khan, put the metal plate on the ‘rabab,’ thus converting it into the sarod. 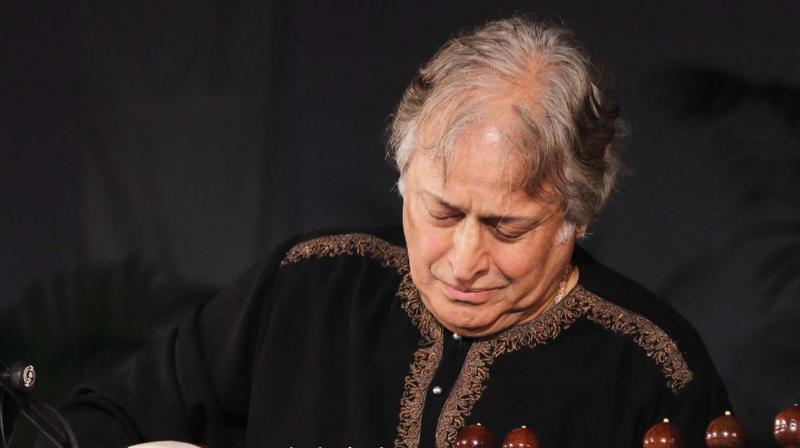 The sarod is one instrument that may or may not have had an Indian origin (Late Vidushi Sharan Rani in her well researched book claims it was definitely an adaptation of an ancient Indian instrument; others are convinced it was an adaptation of a Persian instrument, the “rabab”). What is amazing is that, today, most of the holders of original sarod/rabab craft or “baaj”, are musical descendants of Afghan “rabab” players, who mastered the instrument and its playing techniques. These Afghan-born, originally horse traders and soldiers in the Mughal cavalry were also amateur musicians. They played the Afghan “rabab”, (a much smaller version of the Indian dhrupad “rabab”) and after coming to India, some of them settled in Rewa, some in Shahjahanpur, approximately 100 miles from Lucknow, some in Bulandshahr. In India, they learnt the music of Mian Tansen, from Ustads of the senia “rabab” tradition, descendants of Mian Tansen’s male son through his son Mian Bilas Khan.

This playing style came to be known as the Senia Shahjahanpur gharana, of which there are three main branches.

The main branch today is represented by Ustad Amjad Ali Khan, whose forebears settled first in Rewa, then his great grandfather joined the Gwalior court, and their identity expanded to being the Senia Gwalior gharana; it is now more usually known as the Senia Bangash tradition.

The second branch of soldiers/musicians settled originally in Bulandshahr, then moved to the Awadh court in Lucknow, and finally to Calcutta when Nawab Wajid Ali Shah was exiled there. The two famous sarodiya brothers in the 20th century were Ustad Karamatullah Khan and Ustad Kaukab Khan; in recent times Ustad Ilyas Khan on the sitar was a well-known name. Nephew Irfan Muhammed Khan, a sarodiya and teacher based in Kolkata recalls, “My ancestor Ustad Inayat Khan was the first sarodiya to play in front of Queen Victoria in 1877; there is an interesting anecdote in the family that listeners could not believe that anyone could play so fast and so clear, so they asked him to unscrew the metal plate of his sarod so that they could check there was no other mechanism inside!”

Mian Tansen’s male descendants were “rabab” players; one wonders why this should be so, as in those days the instrument regarded as the “senior” and the sacred one was the rudra veena, the instrument of Tansen’s daughter’s line (Shah Sadarang being the most well known). Be that as it may, the last great musicians in memorable history of this line were said to be four brothers, who lived in the 19th century — Ustad Pyar Khan, Ustad Jaffar Khan, Ustad Baasat Khan (also called Ustad Gyan Khan) and Ustad Chaggan Khan.

Recalling family lore on these historic figures, Irfan recalled hearing that “Ustad Pyaar Khan gave training in the sitar to many; he lived in Banaras for a while too. He travelled a lot and stayed in Banaras. Brother Ustad Jafar Khan was more in Rampur, also in other courts. Those days they all travelled around a lot, as the Awadh court no longer existed. Ustad Baasat Khan died in a small state called Tikari, near Gaya; his grave is still there. His sons were Mohammed Ali Khan and Ali Mohammed Khan (jointly called “Barku mian”), who lived and died in Calcutta. It was Ustad Baasat Khan, who with my great great grandfather Ustad Niamutullah Khan, put the metal plate on the “rabab,” thus converting it into the sarod. He changed the gut strings, and instead used metal.”

The third branch was headed by Ustad Murad Ali Khan, Ustad Amjad Ali Khan’s grand uncle. It is said that it was his father Ghulam Ali Khan who made the major adaptations on the “rabab” thus converting it into the current day sarod; as there were no written records, it is impossible to say who is correct.

It would be fair to believe that the addition of the metal plate was perhaps first put on the “sursingar” (Sur Shringar, or adorner of notes), a large instrument that combined the “rabab” and veena, and which it is said, preceeded the modern day sarod. According to Dr Chandrima Mazumdar, of the same gharana, it was Ustad Jaffar Khan, then in the Banaras court, who, having to play a contest with a well known veena player, realised the limitations of his “rabab”, and experimented with the instrument, leading to the innovations.

(Incidentally, Ustad Allaudin Khan, the other great sarodiya, of the last century with enormous sarod craft “taalim”, had also learnt from Ustad Ahmad Ali Khan, of the same “Shahjahanpur” tradition.)

Ustad Murad Ali Khan’s line today is represented in Bengal, by late Pt Radhika Mohan Maitra, and his many disciples. Radhu babu as he was known as, also had the privilege of having learnt additionally from Ustad Mohammed Dabir Khan, grandson of the Senia Ustad Wazir Khan (from Mian Tansen’s daughter’s line). Radhu babu, being an educated aristocrat, for whom the provenance of the compositions he learnt mattered, had a treasure trove of rare compositions of various Ustads in different generations, which show the evolution of the changing styles of sarod “baaj”. He was also a master of rare ragas.