Lydian is self-effacing, polite and has the most charming smile. 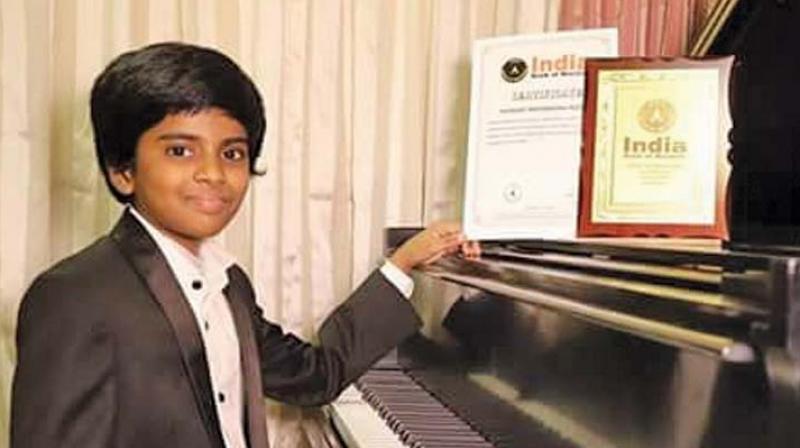 At 23 months of age, Lydian could play the drums in a perfect rhythmic, 3/4 drum beat pattern.

The Mumbai Piano Day, curated by Louis Banks, brings together some of the most ambitious and veteran pianists and keyboard players from India and around the world. For the last two years, securing a place among them, is 12-year-old Lydian Nadhaswaram, whose skills on the piano bears an uncanny resemblance to that of a young Wolfgang Amadeus Mozart, mainly because he can play the piano blindfolded.

This year the line up includes a battery of 12 pianists including Anurag Naidu, Assel Dautpayeva, Maneck Billimoria, Gulraj Singh, Kashyap Iyengar, and Stephen Devassy, to name a few and will cover genres from classical to funk and jazz.

The 12-year-old Chennai based piano virtuoso, can hardly reach the octaves and beyond octaves with his tiny fingers, but can conjure up renditions at lightning speed. He declares, “My most challenging pieces are the ones in which my little fingers cannot reach the octaves, but apart from that, I can play the toughest pieces composed by any composer.” Lydian’s favourite piece to play through is Moonlight Sonata by Beethoven.

It all started when the young musician was barely 23 months old. At an age where toddlers can hardly get a grip on a spoon, Lydian could play the drums in a perfect rhythmic, 3/4 drum beat pattern. His father, Sathish Varshan, a reputed Chennai-based music composer himself, was astonished by his son’s gift and decided to hone his talents at the KM music conservatory. He says, “Initially, there was no faculty for teaching the drums there, but they had a tabla master” and soon Lydian mastered other percussion instruments such as the tabla and mridangam and can now play at least 14 instruments.

Interestingly, the young prodigy was bitten by the piano bug only when he was nine-years-old, narrates a beaming Sathish, “When he was nine he started playing the piano and was inspired by a young Chinsese musician. Lydian saw his video online and told me, ‘I want to play the piano like him’”.

Fearing it as a distraction the drums, Sathish steered the conversation towards a more realistic possibility, “So I told him you are a drummer and that guy is a pianist, maybe one day you can play with him on the same stage, you can’t just learn the piano.”  But Lydian was relentless and also a keen observer of his surroundings. “Suddenly one day, he came to the piano and started playing something, which is not easy for a beginner to play. He used his both hands like a master and I was astounded. From that day onwards, I encouraged him to play the piano as well,” says the proud father.

Another accident at home familiarised Lydian with his own hidden talents that of playing the piano blindfolded, “One day I was playing the piano along with my sister Amritha Varshini, who’s a pianist herself. She playfully threw a towel on me, that fell my head and covered my eyes but still, I managed to play the piece. That was the day; my daddy noticed I could play even with my eyes shut. That practice continued whenever I felt like playing blindfolded,” says the child prodigy.

Some of the other instruments Lydian wishes to learn are the violin and the Nadhaswaram — an acoustic instrument traditionally used in South India that he is also named after. His first name – Lydian is inspired by the Lydian mode, the first mode of scale in music. The preteen is home-schooled and is currently busy practising for almost ten hours a day, having being selected for the upcoming CBS Network show – The World’s Best.

Despite these bewildering feats, Lydian is self-effacing, polite and has the most charming smile. Ask him about what keeps him grounded and he points towards his daddy. “He reminds me that I am born to make this nation proud and calls me the one and only genius. So these words from my dad itself give me more energy and responsibility. He fine tunes every piece I prepare and encourages me not only to excel in music but constantly reminds me to be a good person.”