Slum kids along with the students of Stanford University staged a 60 minute-mime act at NCPA. 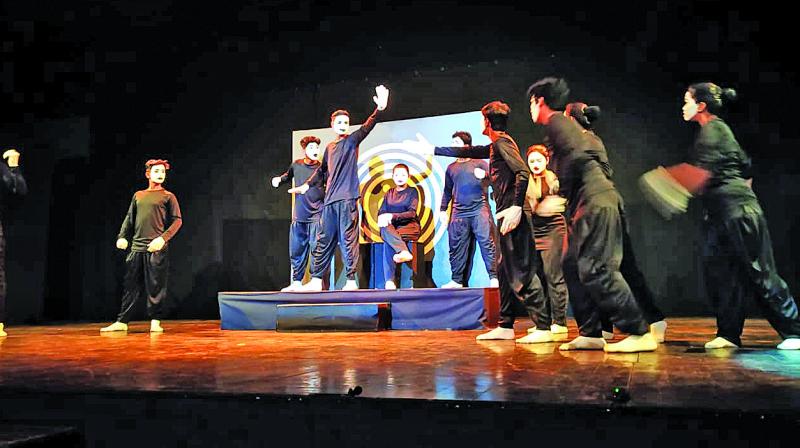 Students from Cappella group use their voices to emulate instruments and focus on harmonising.

Sixteen students from Salaam Bombay Foundation’s Art Academy and 22 performers from the Stanford Talisman —  a student cappella group from the Stanford University —  staged a 60-minute award-winning mime act Circle of Love - an adaptation of Bartolt Brecht's play The Caucasian Chalk Circle at NCPA.

The collaborative performance aimed at celebrating the true meaning of performing arts, brought together children from different backgrounds on the common platform. “Our intention was to provide a platform for interaction, where both the groups can share, learn and grow,” says Aditi Parikh, who is the Vice President – Communication from Salaam Bombay. Talking further about the association Aditi informs that the Cappella group approached the NGO for performance and looking at the language barrier they planned for a mime act “The children come from different backgrounds and to address the language barrier we came up with the idea of a mime presentation,’ she reveals and informs, that the performance has also won the best act award in the earlier held Interschool Theatre Competition.

Defined as singing without instrumental accompaniment, students from Cappella group use their voices to emulate instruments and focus on harmonising. Oblivious to the form of Cappella music, the children had to find out a way to deal with the musicians as both the groups had difficulty understanding eachother's language. 17-year-old Sarthak Ramesh recalls the time he spent with the group and says that they only heard about Cappella music when they were informed about the performance. “We heard some recordings but didn’t understand anything about their music but after working with them, we know what Cappella music is about,” says Sarthak, who along with other children spent one month for rehearsals. “It wasn’t easy because whenever we had confusion, we would speak to them in our broken English but they were very cooperative,” assures the performer.

While art is known to make a significant difference to children and youngsters in general, it also plays a special role in the lives of the underprivileged youth. This cross-cultural musical connecting two communities from across the world, combining cappella and mime is indeed a perfect example of what great leveller music is. “Through this event, we wanted to present a possibility to change the future of a child in a dramatic way. It was also an opportunity to show the potential of these children,” explains Aditi.

Often bereft of opportunities, facilities, creative spaces and personal attention, these kids feel that they got a huge exposure with this performance. “When I started rehearsing for this act, I didn’t know where it would lead but I am exposed to many different things in art now,” says 16-year-old Sakshi. Sakshi also claims that she has learnt the art of facial expression, body language, voice modulation and the importance of the presence of mind. “I now know that this is something I want to do for the rest of my life. I am also experimenting with various opportunities in the field,” she gushes.

After performing all over the world with several accolades to their credit including performing at the Hollywood Bowl, the White House, and the 1996 Olympics, it was a completely different experience for the Stanford students too. “It has been a pleasure and privilege to work with these incredibly talented and bright kids and young adults,” says Edric Zeng, director of Stanford Talisman. For him, this exchange was incredible because of the play written by a German man, and came to be enacted by children from India and sung by a singing group based in the US. “It is a story of people coming together to share stories, to empathise with and learn from people who live different lives and believe different things, to support each other, and that’s exactly happened during this exchange,” he signs off.