The Sound of Bamboo

Performing with only local wooded musical instruments, the Vayali Bamboo Orchestra is unique in its style and presentation. 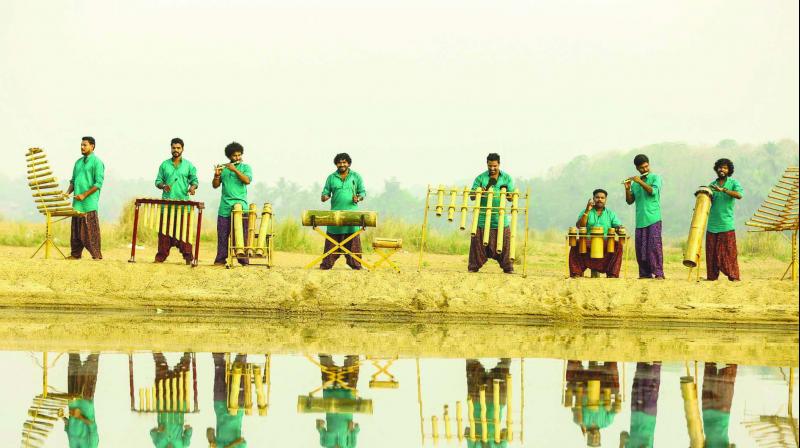 Vayali, a group of youngsters from Thrissur in Kerala, is engaged in preserving their roots. Connected together in 2004 for a common reason, to form a team to start learning the local knowledge systems practised in and around the banks of the Nila, and sharing the same to the young generation, the group and its attempts to revive folk songs and culture in Kerala made headlines. But their biggest break came when they started India’s first Bamboo band. Music culture in India took a big turn in 2009 when the eight-member folk band started performing with musical instruments crafted out of bamboo. Today, the band travels a lot spreading the motto of reviving traditional art and culture, collaborating with national and international artists.

“In 2007, we went to Japan and performed with a bamboo band there,” says band director-turned-computer engineer Vinod Nambiar. “The traditional Music and Rhythm festival in Japan was a blissful experience for people who love folk and traditional music. We went there and performed in front of a packed crowd. While collaborating with other bands there, our vocalists got inspired by the bamboo instruments they used. When we returned, we decided to start a bamboo band for us. Bamboo and its variants are a part of our culture.”

The band comprises Sujil Kumar T.P., Pradeep K.V., Sanoj K.K., Manoharan K.V., Ullas K.S., Vishnujith T.U., Sajeev C.P. and Sajeesh P.P.  It took two years for them to professionally perform in front of a crowd as a band that uses only instruments made of bamboo. The band went through several modifications over the years and unlike other bands, their music and style was limitless. “That made our journey more challenging,” says Vinod. The band owns 14 variety of bamboo instruments - flute, dan troung, seven holes, marimba, bagu, tambore, djempe, kekkera, peeki, kirtea, peepi, mugar Sanku, short drum and timer, most of them inspired from foreign instruments used by traditional folk artists. The instruments are hand-designed given its final form in Wayanad and Tirur.

All of Vayali’s projects and bamboo bands works are based on one idea, says Vinod, adding, “Culture nourishes in nature. Without nature, culture can’t exist. Without culture, society can’t.” They have learned to adapt themselves and have the features of a modern bamboo band by fusing intense dance and percussion routines. They also cover popular Indian and English songs with occasional folk renditions.

With the opportunity to perform at different music festivals, the Vayali Bamboo Orchestra continues to enthrall audiences far and wide.