The Dhrupad festival is all set to shine the spotlight on one of the oldest vocal styles in Hindustani classical music. 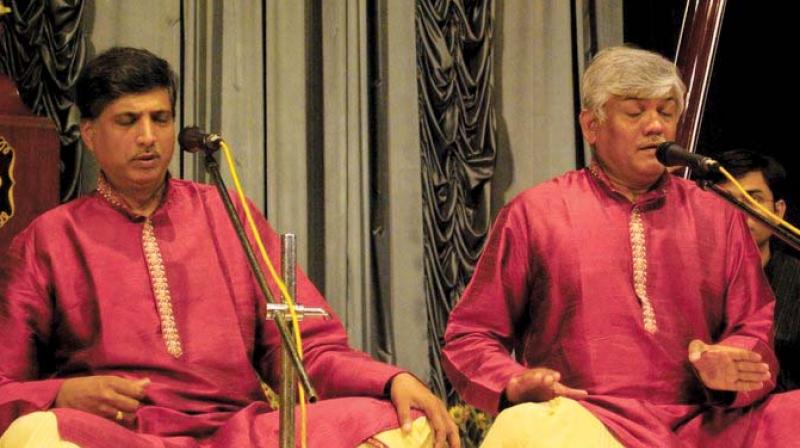 One of the best exponents of the Dhrupad tradition in Hindustani classical music was a reclusive woman whose talent was eclipsed by the fame of her husband, Pandit Ravi Shankar. The late Annapurna Devi refused to compromise on the meditative, leisurely pace of the genre, though its popularity underwent a slow decline as audiences began veering towards the adventurous frills of the improvisational, fast-paced Khayal. Now, the Dhrupad festival, organized by the National Centre for Performing Arts and the Dhrupad Sansthan Bhopal Nyas, is all set to revive the popularity of this genre by treating listeners to the music of some of the best contemporary practitioners of this style.

Hinting at the almost reverential treatment of ragas in the Dhrupad tradition, Janhavi Phansalkar, who has trained with the internationally renowned vocalists Umakant and Ramakant Gundecha, and is one of the performers at the festival, says “Dhrupad music is relatively ‘slow’ in tempo because we stop at each note of the raga and study the behaviour of the sound as closely as possible, meditating on each note.” Another interesting aspect of the Dhrupad style and the reason why it is considered to be a ‘purer’ form of music is that of the absence of an overpowering instrumental score. “The only accompanying instruments used are the Tanpura for melody and the Pakhawaj for percussion. Besides these, the Rudra Veena too is used in Dhrupad music. Both the Pakhawaj and the Rudra Veena are relatively rare instruments to find. The Rudra Veena is big in size and difficult to travel with,” shares Janhavi.

At the festival, audiences will get to soak in the rhythmic, dulcet notes of the Pakhawaj and the Rudra Veena, as well as another rare, renowned instrument exclusive to Dhrupad music – the Surbahar. A favourite of Annapurna Devi, the instrument is a kind of bass sitar that provides melodic gravitas to the meditative notes of Dhrupad music. Sauravbrata Chakroborty, who studies Dhrupad with the renowned Gundecha Brothers, will perform a Surbahar set. The evening will also see a vocal duet performed by the famed brothers themselves, Umakant and Ramakant Gundecha, who have trained under Dhrupad maestros, Zia Fariduddin and Zia Mohiuddin Dagar.  For those unfamiliar with the Dhrupad tradition, the seven ‘Dagar brothers’ were the pioneers of this style of music. There will also be a vocal duet by the ‘Bihar Brothers’, made up by Sanjeev Jha and Manish Kumar.

Though the pensive, measured notes of Dhrupad music didn’t have too many takers in the recent past, practitioners of the tradition believe that its popularity has begun to increase. “The tradition is slowing reviving. As a full-time resident of the Gurukul at Bhopal, I see a distinct rise in the number of students of my generation seeking guidance from our gurujis at the Gurukul and also online. It had reached a lull until a couple of years ago, but the painstaking efforts of the Ustaads of this tradition, particularly those of Ustaad Zia Fariduddin Dagar and Zia Mohiuddin Dagar, gave rise to a number of stalwarts such as the Gundecha Brothers, Pandit Ritwik Sanyal, Pandit Uday Bhawalkar, and others. I feel that Dhrupad took a back seat because there was an absence of sufficient teaching, but the picture will change soon,” says a hopeful Janhavi.