The concert has been organised by Jazz Addicts, a city based group of jazz enthusiats, with Vh1. 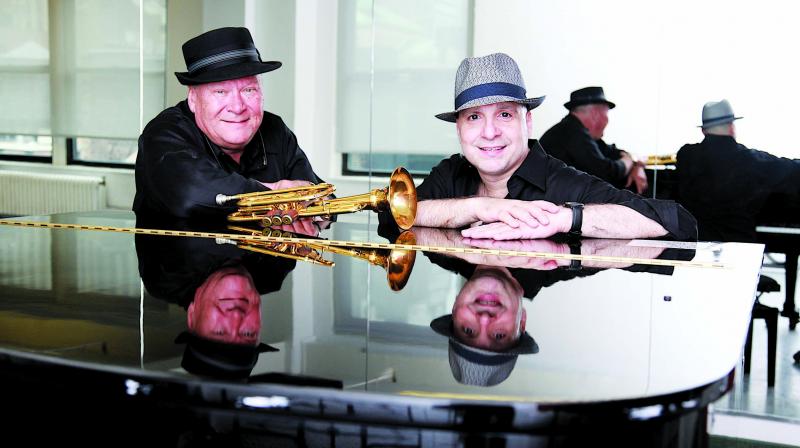 In city for a jazz concert, the accomplished pianist John di Martino and cornetist Warren Vaché, talk about their journey and the improvisational nature of the genre.

On a regular day in New Jersey, 20-year-old Warren Vaché was underneath his little Fiat, working in his garage when his mother called out to him to receive a phone call. Not expecting anybody important, Warren nonchalantly reached for the phone. Little did he know, the voice on the other hand would change the course of his life. “The voice said, ‘Hello Warren, It’s Benny,’ and I said, ‘Benny Who?’ He told me he was Benny Goodman,” says Warren. Soon after, Warren, who had never been away from his home, reached Vermont to find himself on a stage with Hank Jones on piano, Slam Stewart on bass, Connie Kay on drums, Urbie Green as the trombone player, Zoot Sims on saxophone and Benny Goodman — the legendary clarinetist with a moniker ‘King of Swing’.  Reminiscing the moment Warren laughs, “That started a laundry problem that has lasted 50 years.”

Performing at a show curated by Jazz Addicts and Vh1, the Grammy-nominated jazz pianist, composer, arranger and producer John di Martino and the legendary cornetist and trumpeter Warren are set to enthral the jazz enthusiasts of the city with music right out of the American jazz Bible, the Great American Songbook. Joining them will be the bassist and composer Neal Miner and drummer Saurav Ghosh.

While Warren ended up working with Benny for 10 years, John had his own trysts of chance meetings and working with jazz legends, which has made him known as the “shape-shifter” in the music world. As a 19-year-old, John refused an opportunity to study at Berkley College of Music and ended up working at a house gig band in Atlantic City. With a heavy Philadelphia-Italian accent, John shares, “that was my music school, because every week I was playing for great musical artists, but all in different style, from jazz to R&B. It went from the sublime to the ridiculous, but I got to work with Billy Eckstine, Fran Warren, Jack Sheldon and many more.”

The jazz quartet that is going to perform their own interpretations and improvisations on the songs from the classic jazz repertoire, comprises of accomplished group of people with masters of their instruments, and their discography is a peek into their versatile skill with their instruments. This can be inferred as John talked about musicians having matching personalities with their instruments, but Warren is pleasantly unlike the alpha-male military general persona of cornetists,  and even approaches the cornet with the the beauty of violin. He further adds that to achieve this, every musician needs to put in the hard work, saying, “It’s an art interpreting melody, giving it a character and bringing it to life, and making it your own. It’s not like you can just read it out.”

Moreover, talking about the quintessential improvisational nature of jazz, John comments that a preparation before the concert includes thoroughly knowing the melody and harmony, which precedes improvisation. “We prepare by studying the harmony and all the principles of music that we apply, and after that when we go on the stage, the idea is that you forget all that, and try to become a clear china where the inspiration just comes to you, because at the end of the day, when you don’t follow the rules, and you break the rules, that’s when you get the most interesting music. That’s what in a poetry you call the poetic license. The idea is to do all these training and then forget it, to open yourself,” he says.  Moreover, Neal disagrees with deeming improvisation synonymous with jazz technique, he adds that “I don’t think that’s true at all. All sorts of music have improvisations, but in jazz, it’s the rhythm, it’s the swing feel, and that’s the only thing that makes the jazz completely unique, no other music has that.”

Although for Warren, free improvisations with no set structure is not an easy art to master and the trumpeter Don Cherry was the one who has been able to do that perfectly. Talking about free improvisation he says, “If we have a structure and if you insert something into the structure, it still is a structure, you can deal with it. But If I am playing something in a free way, and if somebody comes and inserts something, my whole set is broken. Then I have to do what you have to do, and that’s very difficult.”
—Today, 7 pm onwards, at Bal Gandharva Rang Mandir, Bandra (W)